In all seriousness, this has been a rather disappointing season for us so far, but Western is awful. They are 4-11 (0-4), and don’t have a D1 win in regulation (they have two non-D1 wins and two D1 OT wins). They have also lost by 17 to Saginaw Valley St. The Broncos have a NET rating of 333 out of 358 (we are somehow still 159). There aren’t a lot of gimmes on our conference schedule. This is an easy birdie we have to tap in.

It kind of looks like Western might not be allowing fans on the side of the arena behind the team benches.

A little over halfway through the first half and Western Michigan leads by 4. Not sure what else to say. Same old same old.

Players that shouldnt play any more #4 and #11

Precious is playing a lot like Dikembe. No, No, No!

That weird guy in the Dior commercial looks like a serial killer. 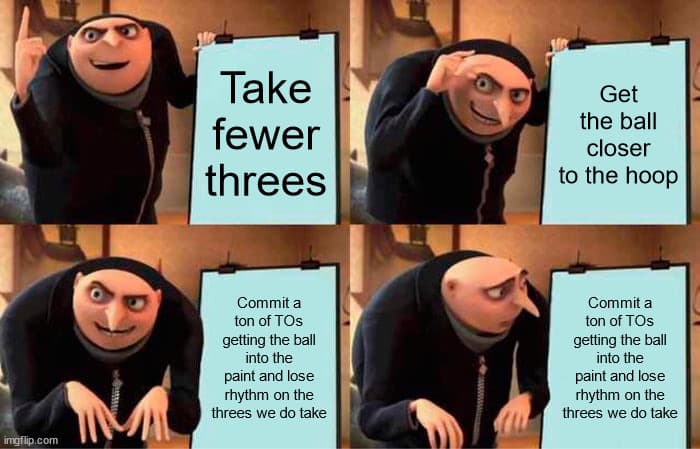 If Western were any good, we’d be down 12-15 points. Their results are misleading because this is only White’s 4th game, but they’d still rank around 300, instead of their current 331 in Kenpom. Western ranks 344th out of 358 in forcing turnovers, yet we found a way to turn the ball over 8 times. As someone else said, same old same old. When we move the ball and show some patience offensively, we score. But we’re taking quick shots and combined with our usual lack of defensive awareness and our carelessness with the ball, we’re keeping a lesser team in the game.

I thought Brown and Ayah played pretty well, but that’s about it.

This will be a great opportunity to see which team/ coach is best able to make half-time adjustments.

I’m not overly optimistic…but I can be hopeful.

Nice little run with Grant out of the game. And now 3 on Ayah.

Some nice hustle from Luka. We’re just not very good, though. Starting to fall back in love with the 3 again (4-18 for the game).

Lairy strong drives, scores and-1 after the U8 time out. 54-46 MU. He’s so quick, and I feel as if he’s gotten away from driving and has fallen in love with the trey.

I usually say any conference road win is a good win, but only beating Western by 8 is not the most encouraging. One positive: zero 2nd half TOs!