Starting a thread to post updates/videos as spring ball approaches. The spring roster has been posted on the AD website.

The official 2022 Football Roster for the Miami University Redhawks

Not too many noteworthy changes that we didn’t already know. It does confirm that David Redding graduated and will not be returning for another season. Same goes for Josh Maize. Don’t see backup DL Kyle Bryant’s name on the roster, so I’m assuming he has left the program. Same for OL Bennett Clark and Andrew Todd.

No mention of incoming WR transfer Tre’von Morgan. So… I don’t know

Kinda surprised there aren’t any early enrollee freshman this spring. Unless they just haven’t been added yet.

Overall a very solid group of players coming back, with a lot of experience. Curious to see how the DE position shakes out as spring practice moves along. Same goes for the defensive backfield, as there are some holes to fill there.

Bennett Clark has been injured most of his time at Miami so he may have decided to call it quits, too bad-good kid and good player. Andrew Todd graduated and has moved on to the real world.

There’s a chance he just isn’t enrolling until the fall. His twitter still says Miami.

There’s a chance he just isn’t enrolling until the fall. His twitter still says Miami.

Yeah, let’s hope that’s the case. That seems to be what’s happening with Miles Marshall from Indiana. Although Morgan was announced with all of the other mid-semester transfers. So I guess that’s why I’m a little confused. Guess we’ll see.

Coach Martin and Ryan McWood speak to reporters after the team’s first spring practice this morning.

Anybody want to take a guess on the 2-Deep?

You could basically pick a name out of hat for the two deep at DE. A bunch of guys who haven’t played hardly at all. Curious to see what they do with Salopek. He played well moving to LB last season, but our depth at safety isn’t great. Going to be a lot of fresh faces in the defensive backfield. Warren will likely play either at nickel or perhaps safety. I think Mundy is going to be a good player for us, so he may be a guy that makes some noise in spring/camp.

Lb Nardone will be in there.

I’m about 99% sure Tre’von Morgan is no longer coming to Miami. So we can forget about him on the 2-deep

That seemed like a pretty strange opening of practice video by CM.

The first version was taken down because it appeared to be incomplete. Here is the full interview 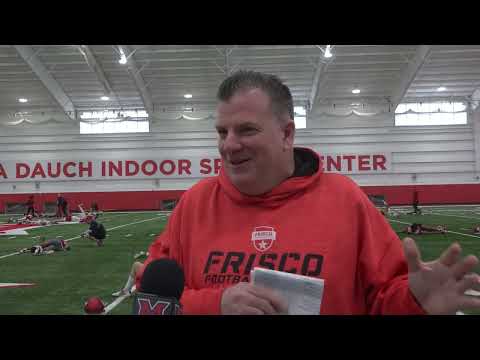 I agree. But Chuck is honest - its not jusy “we got to get better”

Just to be clear, I have no inside information. I’m just reading between the proverbial lines here. He was announced with the other spring enrollees, but now isn’t on the roster. His Twitter no longer has any mention of him committing to Miami. While it could be a “he needs to finish the semester at UK” scenario, I think that really only applies in cases where the player is attempting to graduate first. This is the case with Miles Marshall from IU, who still appears to be coming to Miami. 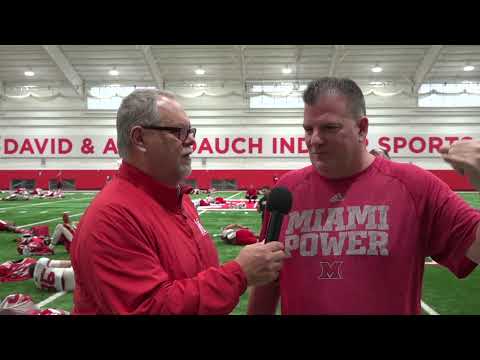 Happy for Woolfork, but I’m ok with a little fresh blood in the offensive coaching staff. Other than Jack Sorensen, you could say the development of our WR has been somewhat lacking. Curious to see who Chuck brings in.

Wasn’t he only recently the WR coach?

I think he was four or five seasons as the WR coach, but obviously here longer overall.