Looks like you’re right. We’re a .500 MAC team at best unless we make some drastic changes. 5-5 with this schedule is a disgrace.

I figure this is how it would play out, post four game loss streak…Bellarmine is not bad, but we generally suck…especially when factoring in 22-24 year olds in rotation.

Every freaking start up (NKU, WSU, Bellarmine etc)…beats our arse. 500 here we come…on the back of N. Texas loss I guess.

Ralph Underhill was the most successful coach in Wright State history, with a career total of 356 wins, including leading the team to an NCAA Division II National Championship in the 1982–83 season.

Remember I’m from the age of Herb Sendek, Devin Davis to Wally…in those days Wright State was program transitioning from DII to DI…now they have passed us bye, so has NKU, and soon will a freaking tiny school like Bellarmine.

I believe they have already

I remember that era for sure. I was 10 when we beat Arizona in '95. WSU became D1 in '87, so it’s been a while now. They’ve had more success than us recently, though this season they’re 3-7 with wins over Lake Erie, Fort Wayne, and TN Tech.

and they’d probably add Miami to the win list if given the chance…not sure what to say at this point. 5-game losing streak, has me not in mood to even attempt watching MAC season.

Our opening games look like many losses…@ UB, BG, Akron and Toledo at home in front of 150 people…this has gone a bit beyond the shitter.

If they can put together a win streak maybe worth tuning in again…but not seeing it at this point. Miami athletics, Jack O, Sayler, admin continue to disappoint.

Yeah, it does not look good at moment. Most importantly, with such an experienced team we continue to look like a “dumb” team with no motivation or sense of fight late in the games.

Another crappy March for bball fans looks to be the case. I don’t think Jack really has got what it takes at this level, unfortunately.

5-5, 3-5 versus D1 OOC…Bellarmine, who recruits Cincy and locally comes in with those players (La Salle, Moeller, X lightly recruited and bunch of Indiana farm boys), and outcoaches/plays us on our floor.

The decline of Miami basketball is unfathomable to those of us that have an even longer perspective than you do Skins.

I was at the first game played in Millett Hall in 1968 against Kentucky.

In those days freshman were not eligible and the freshman game preceded the main contest vs. Kentucky.

In 1968 Kentucky had one of the most heralded recruiting classes they ever had. As I recall, Miami was 1 point down with a couple minutes to go when they the stopped the game in order for the main contest to start on time.

Kentucky was ranked #3 preseason and we gave them all they could handle before losing by 9 to a team led by Dan Issel. I found the box score on the web to make sure my recollection was correct 50+ years later. What surprised me was the Miami outrebounded Kentucky 47-36 and Frank Lukacs had 13 rebounds in that game (with 20 points). A very underrated player in Miami history.

To see Miami now lose to teams like Bellarmine, Western Illinois, Northern Kentucky, Wright State with our history, tradition etc. is beyond belief.

I sadly gave up my season tickets that I had for over 30 years because it became too difficult to watch. I still follow most of the games on ESPN+, It saves me the drive but it is not much easier. 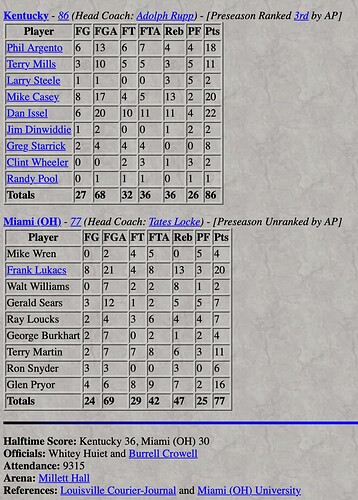 The decline of Miami basketball is a shame but it’s completely fathomable, in my opinion. They, meaning Miami, don’t invest in the program, don’t make smart personnel decisions, and don’t treat the program with any kind of support and respect. So it’s entirely natural for atrophy to occur.

This has been going on for two decades. And everybody here has seen it and called it the whole time. There is nothing surprising about any of this.

You must be. It was founded as a branch campus of Miami and Ohio State in about 1966.

No they’re just old. They’re comparing a program that became D1 during the Reagan administration to programs that became D1 in 2015 and 2020. Wrigt St has won 574 games as a D1 program, has three NCAA tournament appearances (the first in 1993), and would have also had three NIT appearances if not for Covid.

You realize that was literally over half a century ago?

All of your points are spot on.
What is unfathomable is that Miami’s university and athletic administration has allowed it to occur.

It is similar to companies with a great brand name who let the world pass them by (e.g Kodak) in not evolving as necessary.

The worse strategic error was adding hockey as an intercollegiate sport. Kudos to the coaches that made something of the program over the years but Miami had no reason to spend money on that sport when it was started. No natural recruiting base etc.

At some point a decision is undoubtedly going to have to be made between retaining hockey and sacrificing other sports. Miami simply does not have the financial resources to fund as many major sports as we do.

If Berenson cannot turn the hockey program around it is going to be easier to eliminate it. Basketball is never going to be eliminated. How can the Cradle of Coaches eliminate football? It would be hard to imagine that the Miami brand would not be tarnished significantly with a move to FCS. Are we going to eliminate baseball or track before hockey? We need at least six men’s sports to remain D1.

A Group of Five class demotion of some type may be in the future but we will not control that conversation. It is also unlikely it would even save us any money. If that occurs it would just mean the Power Five would take more of the money.

It is what it is. The college athletic landscape has changed a lot over the last 20 years. We have not helped ourselves by digging a big hole in the middle of all of it.

Maybe we need to recalibrate expectations and take a bigger picture look at the college basketball landscape in general if its unfathomable that Miami basketball is where it’s at now compared to the results of a game we lost by nine 53 (FIFTY-THREE) years ago.

What is unfathomable is that Miami’s university and athletic administration has allowed it to occur.

It is similar to companies with a great brand name who let the world pass them by (e.g Kodak) in not evolving as necessary.

The worse strategic error was adding hockey as an intercollegiate sport. Kudos to the coaches that made something of the program over the years but Miami had no reason to spend money on that sport when it was started. No natural recruiting base etc.

I was just saying that as a local “start-up” like Wright State (from when I was first introduce to Miami basketball) has passed us bye …to how another local “start-up” (NKU) that was never a thought more than an exhibition game 10-15 years ago has passed us by…yet another (Bellarmine) now in year two of D1 (ironically with somewhat forgotten local Cincy HS players), I believe has passed (or will) us bye…it’s a perfectly logical parallel for anyone that has been following Miami since that time. That is the point.

What DII startup is next, Mt. St. Joe?

Why don’t you return to immersing yourself in the ESPN predictor…come game time I’ll let you know what’s actually going to happen.

P.S. NESCADAD, Lax, 66…they are really old, LOL, yet some of the best contributors on here…

P.P.S My expectation is we should be as good or better that OU in basketball…but clearly are not.

I see several MAC winning records, and many overall…I see one for Miami in that time.

Thank you for not putting “really “ in all caps.