Winning this game and going south for a bowl sure would be sweet for the kids after a difficult regular season!

Good Weather for mid-November forecasted for the game against BSU in Oxford next Tuesday…sunny and high of 53…game time prolly in mid to high 40’s…unless overly windy will be a good night for football.

We will win this game. This team has never given up on each other. Just another reason why I am optimistic about next year. Finishing strong is a must.

I agree completely that the team has not shown any signs of giving up on each other. That is a positive.

Well crap. I canceled my ESPN + subscription as of tomorrow. Hmm, probably should renew it. Decisions , decisions.

The fact that this game is on ESPN+ on a Tuesday night is frustrating. I know these things aren’t done in isolation, but if possible, would a Friday or Saturday afternoon game be better for us since we aren’t on national tv anyway (from an attendance perspective).

This one should be CBSSN’s game.

Chuck deserves a lot of crap for not getting the program to the highs that we’d love to see, but one thing you have to give him and his players is that they’ve never given up on a season. In 2016 we started 0-6 (with a senior class that was there for 2013) but went on our run to make the St. Pete Bowl. When Timeoutgate happened in 2017 we smashed a decent CMU team the next week, and finished alright after a bad stretch against Notre Dame and the infamous BG goal line debacle. In 2018, 19, and 21 we started 1-3 but finished with at least 6 wins so our bad starts didn’t kill morale (partially a function of schedule of course).

@Love_and_Honor Backloading the MAC into our schedules helps this tremendously. But I have never seen one of his teams quit on each other. That’s obviously to his credit and a credit to the character of the kids he recruits. I held my breath after we fell behind by 10 and looked like dog poop the first quarter at NIU. The cold, dark reaches of DeKalb could have been a surrender point. But the team dug deep and carried on the ages-old Miami tradition of never quitting.

I also canceled ESPN + , since it sucks. Agree this team plays hard 60 mins.

I don’t know about you all, but I am fully preparing for Carson Steele to be playing Tuesday night. Would obviously be huge for us if he doesn’t

It all comes down to if he was diagnosed w a concussion…if not, sure he’ll be playing. If he did have a concussion, normally protocol would have him held out for 7-10 days but I suppose that he could pass evaluations this week and still play. BSU will be tough to beat of he plays…

In yesterday’s press conference Neu did not mention the trigger word “concussion.” He said Steele is day-to-day and said they wouldn’t know until later. He did mention most of the rest of the running backs by name. Ball State gets the extra day this week so that works in Steele’s favor.

Let’s not worry about that…beat someone, win the game outright, no excuses.

If no concussion mentioned, sounds like he’ll be playing.

Is Gabbert definitely out? I missed what exactly his injury/prognosis is.

Interesting find. BR lists Steele as being among six players likely to jump in the portal when it opens. 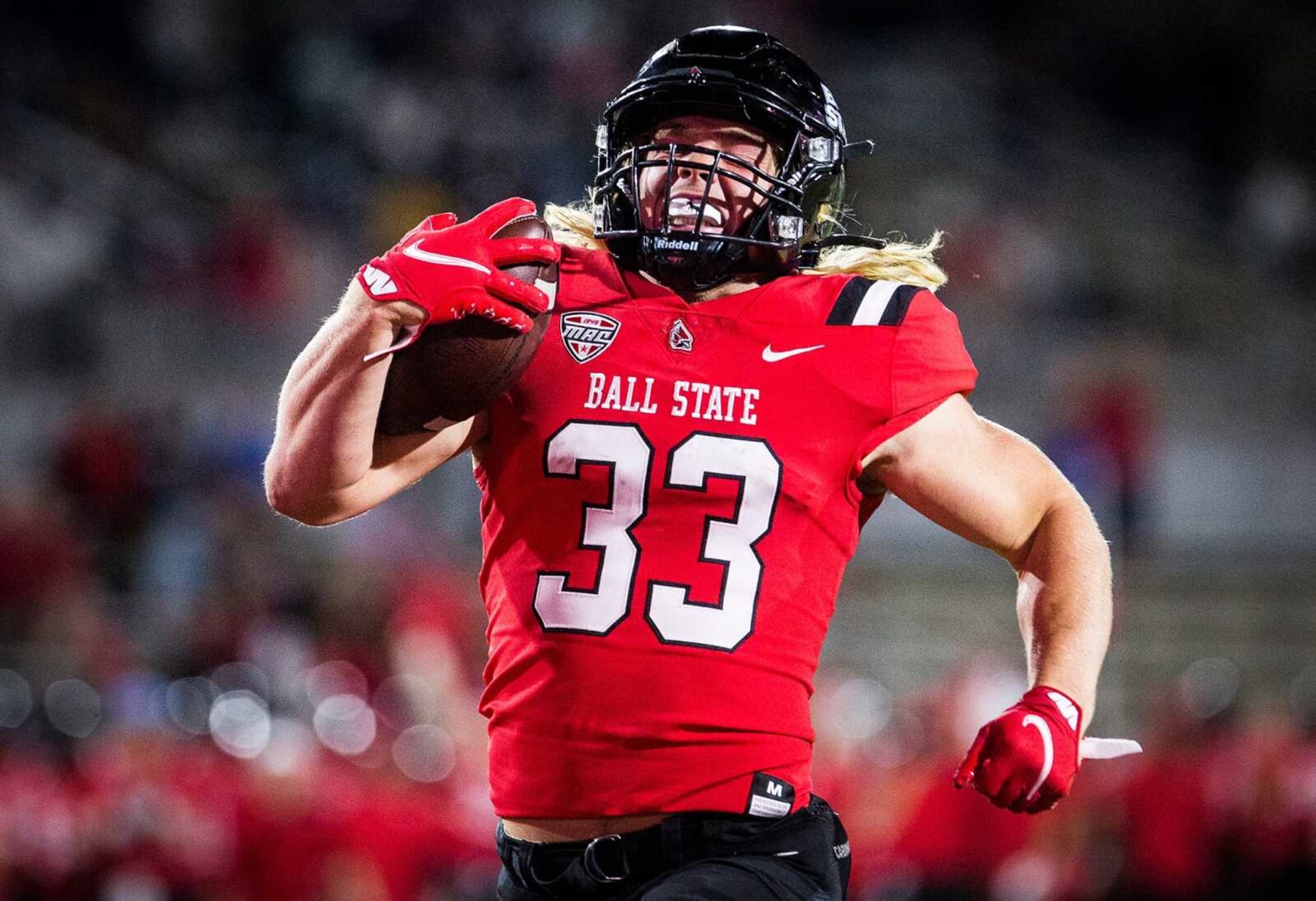 Every year there’s a handful of stars from lower-level FBS teams that shine in their respective positions, giving themselves a chance to climb up the conference ladder.

One of the most productive running backs in the nation has been Ball State’s Carson Steele. He’s drawn up an impressive résumé and will likely garner attention from a Power-Five program if he decides to leave the Cardinals.

Ball State is the No. 3 team in the MAC West with a 5-5 record. Aside from the 2020 season, the Cardinals have fielded a mediocre team year after year. Steele may be looking to find success on a bigger stage, although he’ll have to sacrifice his heavy workload. He currently has 12 touchdowns and 1,280 yards on 249 attempts this season.

The biggest reason for Steele’s possible move is a matured frame, standing at 6’1" and 215 pounds. There’s always talent at the bottom of the FBS, but a massive issue for some teams has been recruiting players who aren’t physically prepared for a stronger, faster game.

Steele seems to have the right tools to make an impact on a team in 2023. In most cases, players will enter the transfer portal to find a higher snap count, but Steele should be searching for a healthier role with a chance to improve with an experienced coaching staff.

He’s only in his second year of college with a combined 441 carries. Steele should look for a team that utilizes him wisely and helps him improve different aspects of his game rather than throwing him into the fire with the offense on his back.

Without specifying the type of injury, Martin said most recently that he is likely out next week, although the day after the Ohio game he said it was a relatively minor ankle injury. I expect there is far more than the injury involved. Playing against Ball State would burn a possible red shirt year and give him only one more year of eligibility. Lots of people - and perhaps other teams - have a stake in this decision.

Well, if he wants to transfer, risking another concussion injury for a 5-6 BSU squad may not be a priority…