We play Stetson next in the Ramblin Wreck Challenge. Here are condensed highlights of Stetson’s last game, a loss to Georgia Tech. 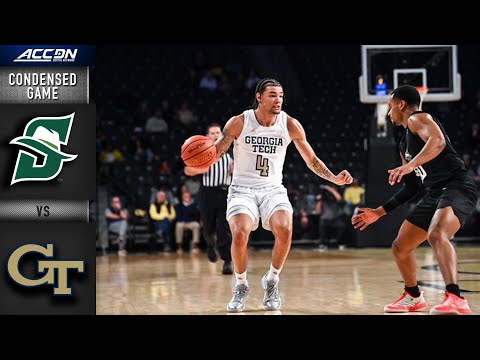 Couple thoughts. The 2 for Stetson who stood out to me are Chase Johnston and Josh Smith. Stetson is coached by former Marshall and UCF HC Donnie Jones. I think Josh Smith is an Ohio kid.

Need to keep playing tough D, and share ball…no reason not to get a win

If you keep the other team from scoring, and pass the ball to open players, you’re more likely to win
- The basketball John Madden

How dare you question this wisdom…been lost on Miami basketball for a decade, LOL.

…of course my all time favorites:

“The only yardstick for success our society has is being a champion. No one remembers anything else .”

“Usually, the team that scores the most points wins the game.”

Stetson was picked to finish 8th in the 12-team Atlantic Sun. Rob Perry was preseason All-ASun. Georgia Tech handled them pretty easily. Perry was only 1/7 shooting in that game. They’re not the biggest team. They are more guard-oriented.

Last year, Stetson was 12-15. The one thing they did well last year was shoot the 3, ranking in the top 75 nationally. They haven’t had a winning season since 2001.

Here is a review from Three Man Weave of Stetson. They picked Stetson to finish 6th in the ASUN. It’s lengthy but worth a read. Thanks to Jeff Bachman who initially turned me on to this website. 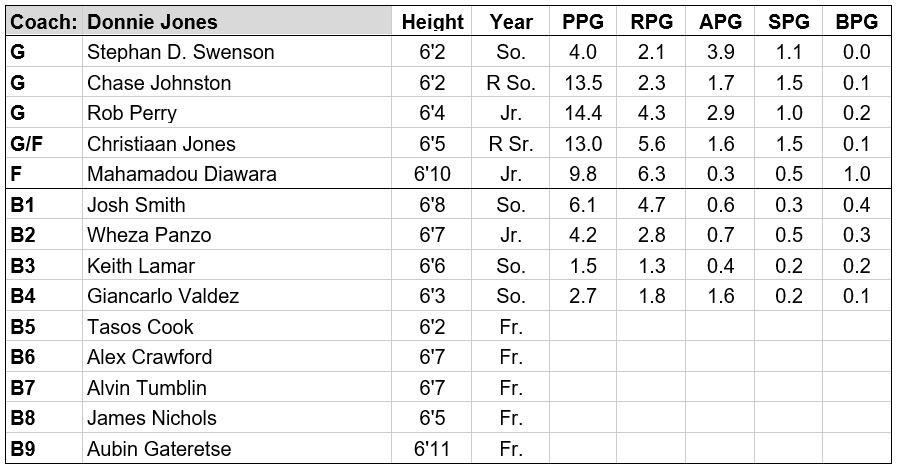 Outlook: In the madness of last year’s back-to-back scheduling, few teams embodied the “zig-zag” nature of those matchups than Stetson. Aside from getting swept at Division I newbie Bellarmine, the Hatters split every ASUN B2B series. That includes with league champ Liberty and cellar dweller Kennesaw State. The Hatters’ inability to finish those series can be blamed on youth: per KenPom, Stetson ranked 345th in experience, rolling out a rotation of four freshmen, three sophomores, and a senior.

To the relief of third-year boss Donnie Jones, the band is back and the members are all a year older. The one senior, Christiaan Jones , chose to use his super senior season afforded by COVID, and Stetson brings back 95.2% of its minutes from last year – 21st nationally, per BartTorvik. The Hatters will be a primary test case of the “does continuity equal improvement?” hypothesis, hoping to capitalize on the benefits of returning the same eight-man rotation that delivered Stetson’s best KenPom ranking since 2001.

The Hatters’ deep and deadly backcourt is their calling card, with Jones joined by Rob Perry (the 2020 ASUN Freshman of the Year), Chase Johnston (the 2021 ASUN FOY), and Stephan Swenson . Perry and Johnston are absolute gunners from beyond the arc, combining to take 363 triples in just 27 games, but when you knock down 135 of them (37.2%), you’re afforded that kind of freedom. Both have “in the gym” kind of range – even though Perry’s jumper form is, uh, unconventional:

Hey, all that matters is whether it goes in (and it’s strangely, hypnotically smooth).

For their part, Jones and Swenson also combined to go 41-of-112 (36.6%), and defenses had serious issues covering all four of them when they took the court together. Giancarlo Valdez offers depth, but he could lose time to freshman sniper Luke Brown , who is slight but pure from beyond the arc.

To max out the Hatters’ potential, Perry and Johnston need to continue adding more to their games. The pair combined to take just 126 free throws (a far cry from those 363 threes), and being so reliant on jump shots is part of why the Hatters’ outcomes were so inconsistent. Getting to the rim more – either to finish or draw fouls – would be a massive boost to the offense.

The shooting does not stop in the backcourt, though. Stretch bigs Wheza Panzo (43.1%) and Josh Smith (37.8%) also knocked in their share of triples, and the Hatters’ offense can completely demoralize opponents when the shooters get hot. Stetson made 10+ triples in 13 of its 27 games last season, going 8-5 in those games. They went just 4-10 in the other 14. Yes, that’s a “well duh” kind of stat, but it emphasizes just how important the three-point shot became for the Hatters last year.

Also important: Mr. Mahamadou Diawara , Stetson’s only meaningful paint presence. The 6’10 rising junior dominated on the glass last year, and when he sat, the Hatters suffered on both ends of the court: 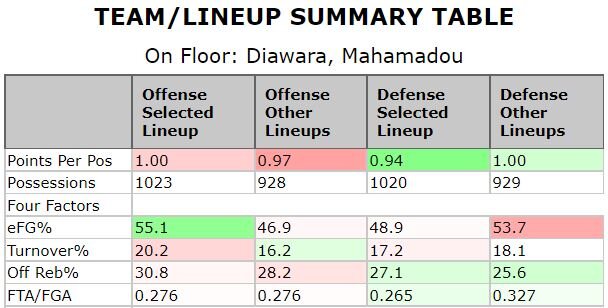 He even evolved into a post up threat last season, showing impressive development despite battling some injuries during the year.

The depth behind him is alarming, especially considering that the big Malian can be foul-prone at times. Smith is the most likely option to back him up, but his face up game is a drastically different style. Freshmen Aubin Gateretse , a thin Belgian, and Alex Crawford , an even thinner Californian, will have a shot at minutes, but it’s likely neither is ready for the rigors of Division I basketball quite yet (despite Gateretse reportedly adding 25 pounds this offseason). With only Diawara to provide any sort of resistance, the Hatters’ interior defense may continue to be an Achilles heel.

Without post depth, Coach Jones has gone to a ton of zone looks, doing so on more than 40% of possessions last year. Being a former Billy Donovan assistant, he also talked this offseason about wanting to go deeper into his bench and press more, though that’s always easier said than done for coaches. If the freshman class can contribute a little, then it’s a realistic goal, and the Hatters’ defense could certainly use the juice.

Bottom Line: Stetson got its first taste of postseason basketball at the Division I level last year, splitting a pair of games in the CBI. That was a remarkable achievement for such a young team, and with a cadre of shooters back led by Perry, Johnston, and Jones, the potent Hatters’ offense will be in search of another berth. Whether the defense can keep up will be the question, and with only Diawara to protect the paint, the answer seems dicey. Still, this could end up being too low if the explosive backcourt finds more consistency in closing out games.

“Here’s a guy when he runs he gets faster!” - Frank Caliendo impersonation of John Madden

11-2 at the first media timeout. Good start. Want to see more inside out basketball.

Good start. Up 11-2 at the first media timeout. Stetson has only had open shots from their weaker shooters. A few drives from their center who should’ve been contained, but other than that, good start.

38-26 Miami at the half. Brown and Ayah did it all at both ends. They combined for 24 points and 10 rebounds. Our guards forced some shots as the half wore on. We’ve hurt them on the high pick and roll. We need to let that develop and take it. Defensively, we should stick on the shooters and not help so much.

How do we look? I’ve only been following the score. Good to see Ayah in double figures since it seems we’ve come back to Earth from 3.

We look like the clearly better team. If the guards come on, it could get ugly. Just need to keep not turning the ball over and getting good shots.

Stetson’s three-point shooters are keeping them in the game.

Yup…we’ve had a couple swings of missed opportunities and shots that are too quick.

Not sure Ellar is ready to help…surprised he was in.

Ayah has really saved us on Offense, as odd as that sounds…

We are starting to try to keep up in trey shooting…but seems like they are beating us at that game.