So far the only winner out of the MAC has been our Miami RedHawks. From what I have seen and read, the team and supporting cast, represented us well and have made me a proud alum. Can’t wait until next season.

The 0-4 start sucked, but 3-5 (with NIU losing very close to a good Coastal Carolina despite having 25 players unavailable) isn’t something to be embarrassed about. I’m glad all our teams got their games in, whereas the AAC had 3 of 6 their ordinary bowls canceled (not counting CFP).

I’m giving Miami 100% of the credit for the turnaround. You’re welcome, MAC.

I’m partly teasing here, but not entirely. Being pleased with 3-5 is the most “post-2005 Miami sports” thing ever.

I get that, but after the MAC started out 0-4, I was expecting a possible wipeout so winning 3 of the last 4 was a relief. (especially our win!)

Considering a week ago at this time I was thinking the conference might be 1-7, I’ll take 3-5.

I doubt there have been many years in which the MAC has one 3 bowl games. I know you are going to say well we get 8 teams in but 3 of them were good enough to win and only 2 got crushed

Our bowl was the only game on at the time, on the main ESPN channel, crowd looked good on tv, and we played brilliantly. Strong showing for us. Western stomped Nevada, and Central got a win against a Pac-12 team today on CBS (free tv). Great look for the MAC.

Yeah, 3-5 isn’t great overall, but considering our conference is considered a “lesser” conference on the national stage, and we got 8 out of the 12 teams into bowl eligibility in the first place, that’s a win. Especially when you consider that most MAC schools play tough OOC schedules against Power 5 opponents. When you look at the SEC getting something like 10 to 12 teams into bowls, it’s telling that most of them get whooped. They tend to pad their early season schedules with OOC patsies.

We can talk down a 3-5 MAC performance, but look at the big picture.

and the same bowl record as CUSA.

Granted, the SEC still has several games to go and will most likely win the majority of them. So, we talk about being happy with a 3-5 MAC performance, but in the big picture I think we should be.

Not to mention Miami won. So, that makes everything better.

Also, don’t forget that 8 games for the MAC leads to more $$. Win or lose, we still get the money. 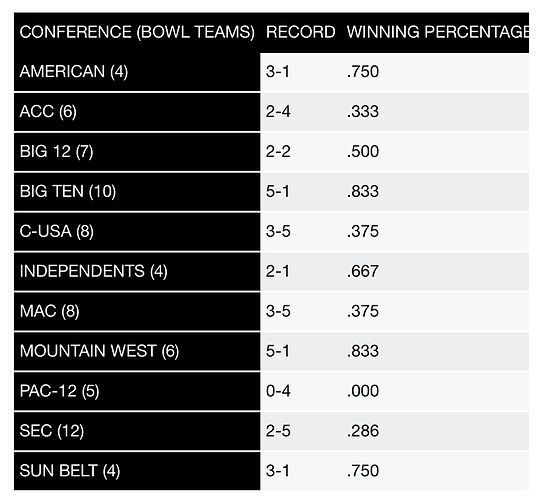 Take the money and run.

No offense but who cares about conference pride? We won. We won convincingly. That’s all that matters to The Sackman.

Agree that Miami win was most important by far, but the conference doing well also reflects better on all members including Miami. Chips winning over a P5 squad was a nice bonus to cap things off!

Agreed Cincykid. While Miami’s victory is most important to us, the conference performing well is also a good thing.

Did anybody see what CMU got as a bowl payout for going from the AZ Bowl to the Sun Bowl? They def got a bump in payday. And MAC equally shares bowl money, correct?

A rising tide lifts all boats. If it helps the MAC, it benefits us.