Anybody know how beat up Kent might be coming into Oxford next Saturday? If Chuck’s scheduling theory holds sway, they should be down to their twos and threes already. There’s no info posted for them on my injury report tracker…

We know they can still score points - put up 21 at Washington and 22 at Georgia. We put up 17 at Northwestern and 20 at Buffalo.

Looks like they’re pretty healthy. Surprised this on went to OT with these stats. That ranking is bolstered by our week 1 game against UK. Stats can be misleading

Yep. Brett’s pre-injury stats make us look better than we are now.

Looks like we’re 12th in the nation in rushing defense and 109th in passing yards allowed. Teams are going to throw at our corners all day.

I was going to say they are probably pretty tired after running up over 700 yards of offense.

For much of the game against Buffalo our pass rush kept their QB in check…just not quite enough to make up for our lack of ability to score points.

Buffalo seemed to adjust their QB protection in the second half. We probably would have had more pressure with McWood in the game.

Gotta get to that magic 6-6. Might as well get to half of it with Kent in our Fall Break Homecoming game. God Bless the FCS! 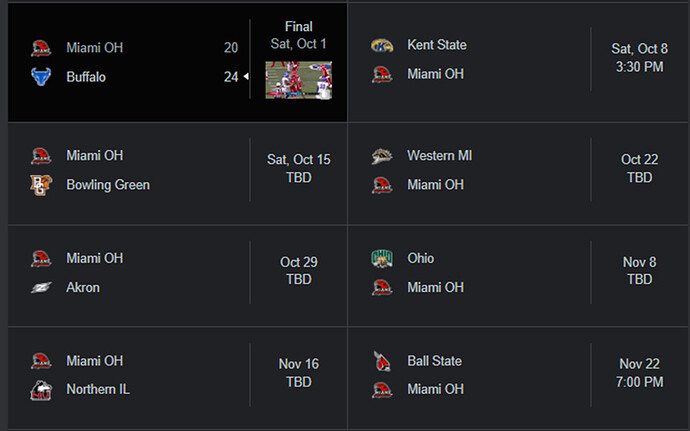 6-6 looks like a stretch, but doable…sadly I don’t really see how we can do better than that with what this staff and O have shown.

Our OC calls hopeless deep passes like he’s a 6 year old playing Madden. The only QB to put up a decent completion percentage was Ragland, but that was mainly because he didn’t have the arm strength for the deep throws, so the OC had to call more of the short/medium pass plays that we normally never see.

I hear ya…in the end though our QB accounted for more than 265 yards and two TDs and our D generally dominated…INT led to field position for UB and blown coverage on D led to another TD, plus a bunch of penalties.

If Aveon can increase his passing to 150 yards per game and rush for ~100, plus a collective 100+ yards from our RBs, we can win some games…maybe 4 more, but that’s all I see…bummer we let this one slip away.

So true on OC…I cannot stand this chuck it up game…might be defining quote of CM tenure!

It’s not that it can’t work, but really only does if you have a dominant run game, which we never establish. This that is our only hope…run, baby, run!

That will have to improve to be competitive, the other 11 MAC teams are averaging 241 per game. We don’t have a “play from behind” offense.

The Athletic’s 131 Ranking was just released. It has us at #110 - just ahead of Northwestern and 8th in the MAC.