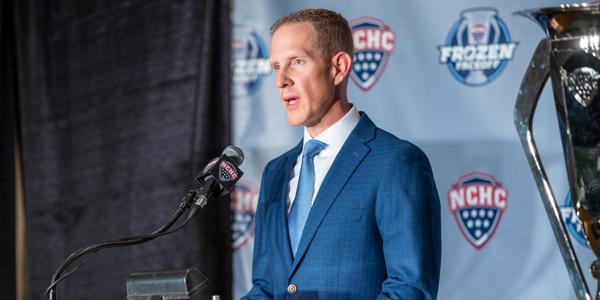 Fenton, who has served as Commissioner since 2013, leaves for same role with The Summit League

Is he going to the Summit League to kill basketball ?

Miami hockey should depart the NCHC in April too

I never thought of that. We’ll have to see

Summit League seems like an obvious jump for him. Denver, Omaha and UND are all in that conference for their other sports so they are already familiar with him.

One of the dominoes in what eventually folds the league. The whole NCHC (minus Miami and WMU) will go to the Summit league. Bergeron is more than fine with this; he’s already tired of getting his teeth kicked in every weekend. Miami will return to the ‘new’ CCHA. while Rico brings St. Thomas to the Summit to reunite with Fenton.

All part of the New World Order

Do you mean there will be Summit League hockey, or do you mean for all sports? I have a hard time seeing St. Cloud State and UMD jumping to Division I for all sports, let alone CC.

Yeah, I’m not sure why some of the other schools would move to the Summit League for all sports, or why the NCHC would give up the brand they’ve built as an elite hockey conference to adopt a mid-major all sports league identity.

Would think St. Cloud, UMD and CC would be affiliate members for hockey only.
They may not have much of a choice. The four Summit League hockey schools just need two more to establish a league with an auto NCAA bid and they have leverage with Augustana and Arizona St out there looking for a league.
Fenton and the Summit four likely believe they elevate whatever brand they are associated with to a higher level increasing the overall marketability of the league.
The Summit league already has a media deal with ESPN and regionally with Midco Sports, the producers of the pod games and North Dakota hockey games. Adding additional hockey to those deals should bring additional revenue.

They may not have much of a choice. The four Summit League hockey schools just need two more to establish a league with an auto NCAA bid and they have leverage with Augustana and Arizona St out there looking for a league.

Why exactly would Denver, Omaha and UND want to tear the NCHC apart to play with St. Thomas, Augustana or Arizona St?

It probably won’t come to that. UMD, St. Cloud and CC will follow them to the Summit League because they have no other option but to do so. I’m just pointing out that the Summit Leagues schools hold almost all the leverage over those three schools.

This still doesn’t answer why the three schools would want to leave the NCHC?

I’m confused why there needs to be a Summit hockey league. It can just be the NCHC minus Miami (and maybe WMU if they’re so inclined). NCHC can add whomever they want.

CCHA looking like more reasonable option unless the Titanic can be steered around the bergs pretty quickly.

Western Michigan is totally happy ( this comes from comments on the MAC board by Western fans) and excited to be in the NCHC, it has been a tremendous boon to their program. No way they would want to leave.

Great to hear WMU is pleased , but what about us? Either we crawl out of being a doormat or find a league we can reasonably compete in and allow our students and alums to enjoy a few victories.

I explained my speculation above.

The four Summit League hockey schools just need two more to establish a league with an auto NCAA bid and they have leverage with Augustana and Arizona St out there looking for a league.