Before the game last night I commented on a thread I wouldn’t be surprised to see transfers soon after this game. One of the players I thought would transfer was Pace. Unfortunately I was right. He has entered the transfer portal. Don’t be shocked if he ends up at UC. Phelps to UC or somewhere like Michigan State wouldn’t surprise me.

Pace to UC has been all but set for at least a month. Unsure where Phelps is going, but I thought next season would be his to show off what he has with Kimpler graduating. He’s always been great against the pass but never consistently looked comfortable against the run.

Although not shocking, still sucks swamp water through a straw.

Tough blows. It also sucks that it seems likely that Pace will be all but surely playing against us in the future.

Miami made him a star (along with his talent and work.) It’s not we never had anyone make it to the NFL. I know this is the new reality of college sports, but if he goes to UC it shows a purely mercenary attitude.

Phelps’ MU bio is still there (for now). Yeah it didn’t take long for Pace’s bio to vanish.

That’s the new reality and it’s not an attractive one. G5 stars are going to be “called up” through the portal on a regular basis and kids not playing at their initial P5 school are going to be looking for a landing sport in G5. G5 coaches will have to be re-recruiting their own roster constantly. If a G5 coach builds a decent program, he could lose it in a heartbeat to the portal. Unfortunately, as distasteful as it seems, we could be serving as UC’s equivalent of a minor league franchise for some time. If that starts to happen routinely, I’m all for ending the series.

Ivan’s bio is still there if you know where to look!

Phelps with an offer from Kansas. 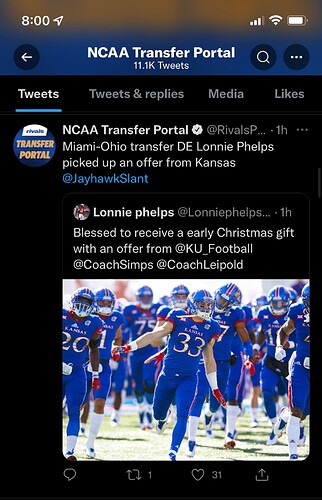 Honestly, I know I’m biased but Miami has to be a better gig than Kansas. At Kansas, you have the potential to get blown out by P5 schools 8 times per year.

Yeah you’re playing the big boys on a weekly basis but your team is also getting dismantled on a nearly weekly basis.

Except against Texas, of course.

Ask Nick Harwell how that move would go.

In fairness, I’d trust Lance Leipold a lot more than Charlie Weis (especially since he’s actually coached against him). Wish he were staying, but Lawrence is a nice college town.

Lance Leipold is a much better coach than anyone Kansas has had of late, to be fair.

That is a fair point.

Blackbird in his defense his brother does play for UC. I understand him wanting to play with him.

Certainly every transfer has different elements and reasons. Who among us can enter and understand the mind of a college age athlete? I can not assign percentages to the myriad of reasons, but it certainly seems as if the possibility of leaving a team that could lose every game to go to a team that could win every game must be at least on the list.

Well Phelps has an offer already from Kansas. He would be better off staying at Miami than going there. KU football is atrocious.