The only game he lost was the 2019 championship year, when Miami was leading 27 to 14 at the half; Miami had already clinched the East Division and Chuck pulled Gabbert and several other dinged up players to get ready for the MAC Championship game.

Chuck did not coach against Ball State prior to 2016.

Ah, I remember 2019. He pulled him when we were ahead to preserve his health when we had a backup with some experience. But this year he let him continue play late into well-decided losses with no well-experienced backup… Strange.

I hope CM’s streak continues. He’s piled up a nice set of Redbird Trophies. Biggest win was 2016 to get bowl eligible after going 0-6 but the 2020 Cardinal team won the MAC and pounded San Jose in their bowl game.

I was just thinking I felt that we have dominated this rivalry lately. Big one next week.

A win is the difference between moderate success and season failure. No pressure!

I know some of it depends on the theoretical bowl result, but even if we beat Ball State and make/win our bowl to finish 7-6 I wouldn’t call it a “moderate success.” We returned a lot of skill players and were the preseason East champ yet will have finished 4-4 in conference play, it’s just us treading water.

Agreed…lost two with Brett as well…never know what percent he was health-wise.

Yes it is, but the starter has missed several games. I have to think Brett was worth at least 1 more victory, possibly 2.

We do need a new OC, that killed us all year! 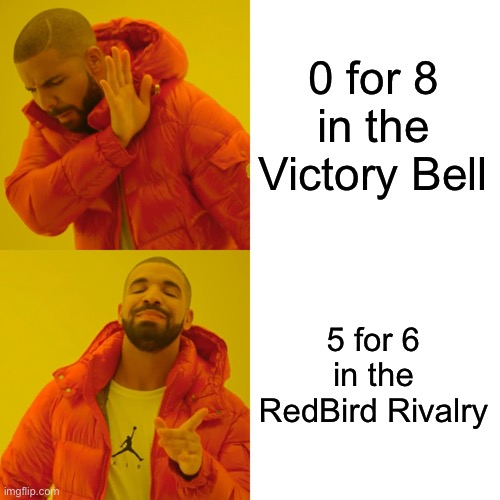