Caleb has announced he will not be going to the Bahamas Bowl and instead has entered the portal as a grad transfer. 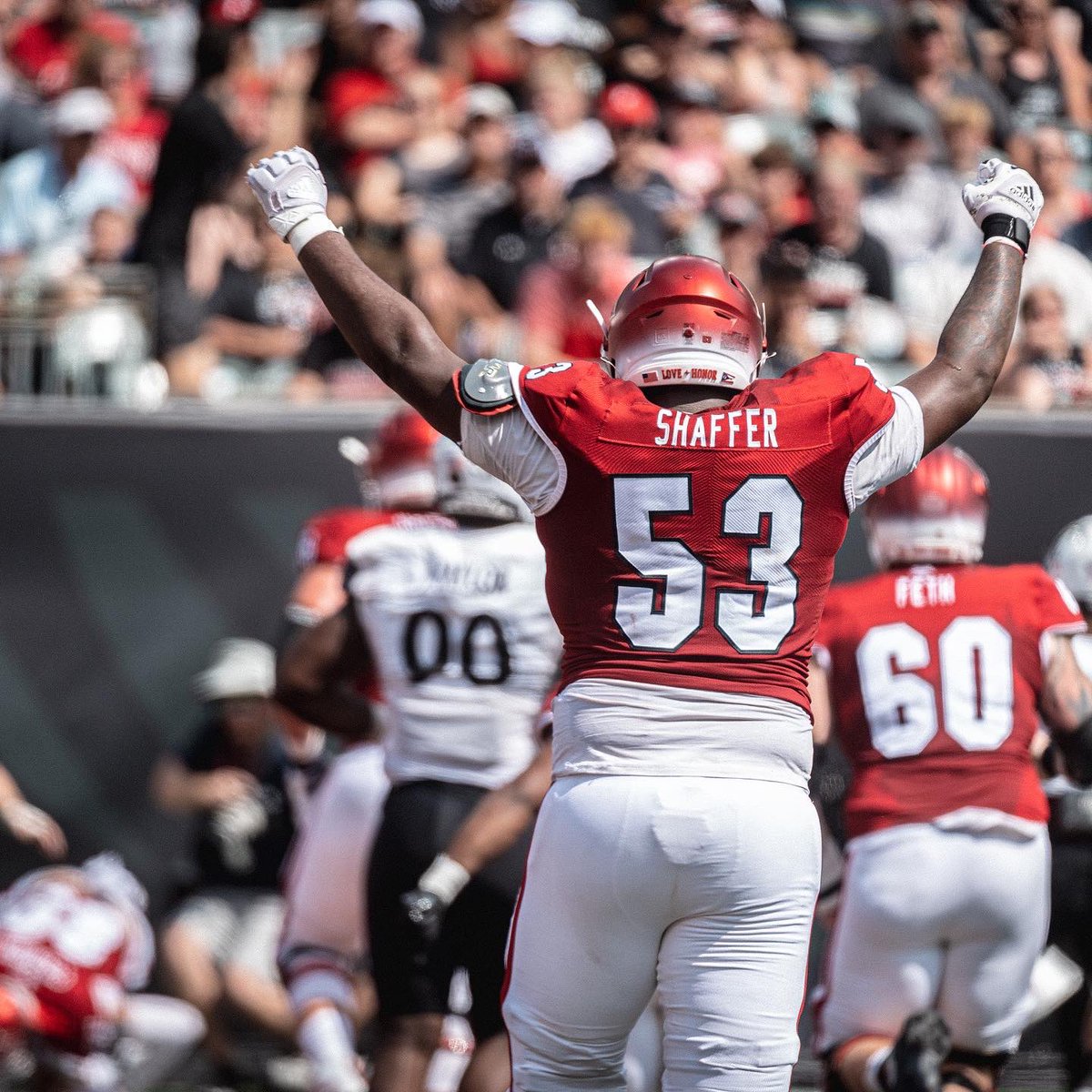 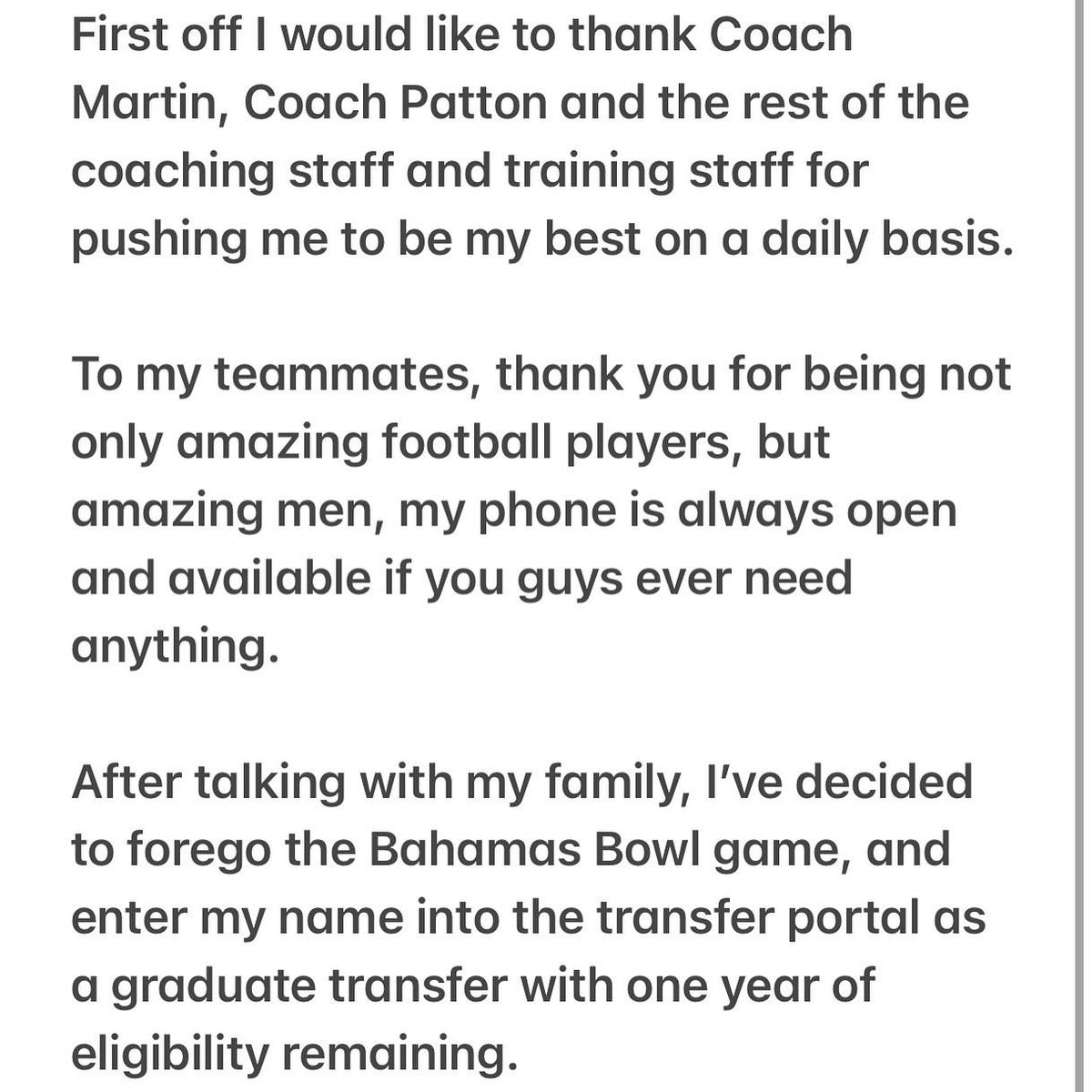 Gabbert wasn’t likely to play in the bowl game. Schaffer would have. So that is a loss for this game. I wonder who else off our depth chart we may lose between now and 12/16.

He did a great job and got his degree. I think he ends up at a big school and gets some draft interest in a year. Bummer though.

I’m speculating almost everybody on our roster shown as a junior or above probably already has a degree because of the COVID year. Hard to tell with the transferred-in guys but I’m assuming all of them with another year of eligibility left will stay. Hard to tell how many of the freshmen and sophomores will transfer - depends on way too many factors besides just playing time. I’m guessing we might lose 7-12 altogether to the portal - maybe a few less because we are heading to an attractive and exotic bowl game. I guess we’ll see.

I would assume we’ll lose at lease a couple more after spring practice - those who don’t see themselves anywhere near the depth chart going into fall.

My guess is Caleb wants to do what Danny G did. Got his degree, went to Ok State. Although it didn’t help him with the NFL. Caleb likely trying to do something similar.

Got no issues with that. Hope he goes big if he can land it.
Edit: in the bowl game last year, my in-law’s who love Oklahoma football said about Caleb “that guy could play for Oklahoma”

Very bad news - he would have been a key to our hopefully better O line next year - we have now lost one of the best QB’s in the history of Miami football but now also one of our best O lineman - who is next ? David Saylor are you watching? Anyone on this site or in the Miami family that thinks all is is well with this football staff is living in a dream world!

None of this matters without staff changes. That’ll be the news I’m curious to track, or not.

How is this anyone at Miami’s fault this year? Both dudes earned their degree. After that in the old days they took regular jobs like all of us! Now they get to play 5-6 years. Sometimes 7. It’s bonkers. Now, if a bunch of underclassmen leave, then you may have a fair argument.

This is already happening everywhere, not just Miami.

Because of COVID all juniors already have their degree and sophomores who RSed. The portal is going to be Absolutley packed this season

The class designations on our roster are misleading. Some JRs are 5th year seniors academically, RS-FR are juniors, etc… Why there is no standard across schools on the posting of grade/eligibility is puzzling. Contrary to other claims, this year’s roster is actually a very mature one (possibly the oldest average age of CM’s tenure). I think the staff can be guilty of assuming that players will be available until their eligibility expires, some will simply hang it up after graduation but many will do as Shaffer and take their last ride elsewhere. For all that is right with CM’s loyalty towards 4th, 5th and 6th year guys it seems that it can come at the expense of some of the younger guys who were, ironically, part of higher ranked recruiting classes.

7-12 exits seems to be a light number to me, I see a minimum of 7-9 just on the offensive side of the ball. I am sure that we will rebuild via the portal…the problem with doing so is that you can quickly lose your program culture when bringing in guys that are coming in from another culture and will never have been indoctrinated as the freshmen were. In turn, this type of roster reloading is discouraging to the 1-2 year kids that are being passed over thus the spiral can begin. Very few programs have had success with high volume transfers sans a change in staff that comes intent on a new culture and clean slate for all.

You are correct and 40% of those that entered last year did not find a new team.

Someone with a lot more time on their hands than me needs to do an analysis of the portal impact on Miami.

Chuck did very well last year. Addressed some specific needs with DB’s, a solid OG and WR. A few additions were puzzling like TE and RB where we were already deep. I see O-line, WR, LB and maybe a RB as potential targets this year

It’s impossible to do this objectively. For example, there is no way to know how Pace would have performed in our D vs UC’s. And had he stayed, who would have he played over? McWood?

Danny G has broke his foot 3 times in the past year I heard, don’t think transferring is what hurt his chances. Caleb is making a great move. Wish him the best!

Wow I totally disagree. With that attitude why should Miami students even fund a football team

Uh yeah. Pace the reigning MAC defensive player of the year would have played over mcwood