Is it safe to do a preview about 24 hours before the game tips? BG is 0-2 in the MAC, losing in Muncie by 1, coughing up a 5 point lead with 30 seconds left thanks to a missed free throw, fouling a 3 point shooter, giving up an offensive rebound on a missed free throw, then turning it over on the ensuing possession. They followed that up by losing at Buffalo by 11, a game that saw the Bulls, without Mballa, shoot 33/35 from the foul line. BG is 5-6 against Division 1, their best win being a 1 point home win vs. Oakland, who’s playing well.

Coach Huger’s team plays a similar style to what they’ve played under his tenure. They play fast with multiple weapons on offense while playing below average defense. Daeqwon Plowden is arguably their best all-around offensive player. He can take you off the dribble, post you up, score in the lane, and hit the 3, though his shooting numbers are down modestly. Trey Diggs is still primarily a gunner. 68 of his 89 attempts are from 3. You have to look for the quick pick and roll in transition in which Plowden or Diggs jack one from deep. Samari Curtis, former Ohio Mr. Basketball, is at BG via Nebraska and Evansville. He has a nice all-around game as well, including a solid mid-range pull-up. Joe Reece gives them a post option. He’s wiry strong and athletic with a nice shooting touch. Off the bench, Josiah Fulcher is a very good shooter. Chandler Turner can score from anywhere on the floor. Gabe O’Neal is a load underneath. Myron Gordon gives them more of a scoring punch from the point than starter Kaden Metheny. Metheny wastes a lot of dribbles and can be forced into mistakes because of poor decision-making. But overall, BG takes care of the ball and they are a really good offensive rebounding team.

However as good as they are offensively rebounding the ball, they’re equally as bad on their defensive backboard. BG is below average defensively because you can take almost any of their players off the dribble and they give up a lot of 2nd chances, even when they have numbers under the basket. You would think that a team that plays 10-12 guys would give more of a defensive effort, but they don’t. I think this is why we’ve had success against BG. If our guards are patient, work the ball, then attack off the dribble and don’t settle for jumpers, we’ll get any shot that we want. Just like Buffalo, 1-on-1 defense will be the key against BG’s offensive playmakers.

Since Jack Owens took over:

Conference record against all other opponents:
BG 39-27
Miami 24-40

Given that we’re also presumably getting NW Ohio Dalonte, this would normally seem to be a good matchup for us, but who knows how the team will look coming off the Covid break.

Samari Curtis and Joe Reece have been nice transfers for them. Both in the starting lineup.

We look awful so far but lots of time left 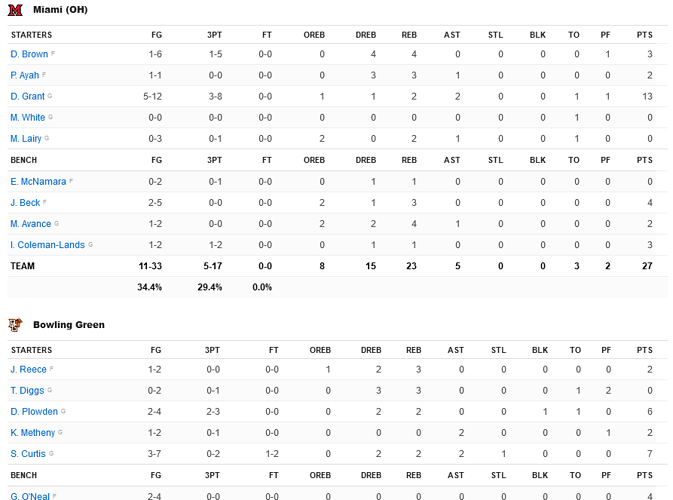 There’s that bad BG defense at the end of the half. Grant with a buzzer-beating 3 off a high screen to put us up 35-26 at the half.

Neither team set the world on fire with their play in that half, but we stayed in the game early, starting slowly as you might expect given the layoff and ended the half on a 26-9 run. I think BG plays too many people. They built an early nice lead, then put in their 2nd unit and as with the Ball St. game, they gave the lead up. I think we’ve been solid (for us) defensively. But where we’ve been really good is on the boards. Offensive rebounds: Miami 10, BG 1. 6 assists on 14 made field goals is very good for us too.

Down to a five point game at the under 12 time out. Miami already with eight fouls. This color announcer or analyst or whatever you want to call him is quite the Captain Obvious…

We have been called for 10 straight fouls

Regressing to our OOC mid-2nd half meltdown it would appear.

Looks like made wrong choice checking on this one…up 9 to down 4.

So Miami…let me guess our next 6 shots will be treys clanking?

What was that possession out of the timeout?