Reporting in from Ed Robson Arena… 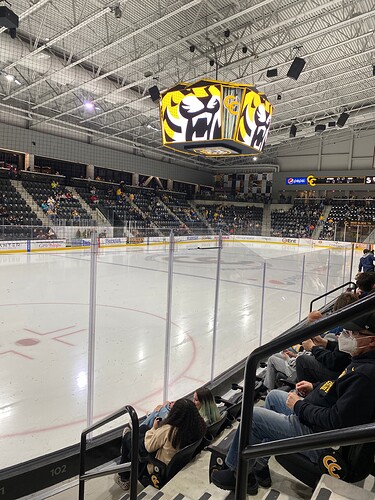 Reporting in from Ed Robson Arena…

As a sports fan, that facility is beautiful! Can you can more pictures around the place and post them here?

I’m glad that CC actually has their own place

I’ll try to get some good pictures on the way out…and we’ll also be here tomorrow night. Our seats are about a mile closer to the ice than anything we ever had at world arena, that’s for sure!

Not a bad first period…we came out swinging. The major was (unfortunately) right in front of me and I was honestly kind of surprised they even needed to review it. We did a great job killing that off, only to give up a kind of crap goal right before the intermission. Honestly, not terrible hockey, which is a huge improvement over the last time they were out here…

2-1 after two on a pair of power play goals. And we killed off another major (much more questionable, but I couldn’t see the replay so

)! Hopefully we can keep the momentum strong and finish this!

Tied up 2-2. Haven’t been watching live but checked the stats and SOG are pretty even (30-33) which is a good sign. Hope we can pull it off

Outdated as soon as I said it - PJ Fletcher scores to make it 3-2!

CC ties it up on the power play. Then they score to take the lead on another power play but it’s overturned due to goaltender interference. 3-3 with 4 minutes left.

Loss number 11 when tied or leading after two periods.

From what I saw of the game, seems like the team was playing well though. Better effort than some of our games this year.

That was both encouraging and completely heartbreaking. We played well and the power play was on fire for maybe the first time all season. I really wonder what the game would have been like if we hadn’t lost savage so early in the game. Those majors were really tough. I can’t complain at all about the first, but I’d definitely like to see the replay on the the second one (and the overturned CC goal, too…it was at the other end of the ice and they didn’t show a replay at the arena). It was a very entertaining game to watch, if nothing else.

I walked around the arena at intermission and took a few photos. Let me know if there’s anything in particular you’d like to see and I can try to get a photo tomorrow night! 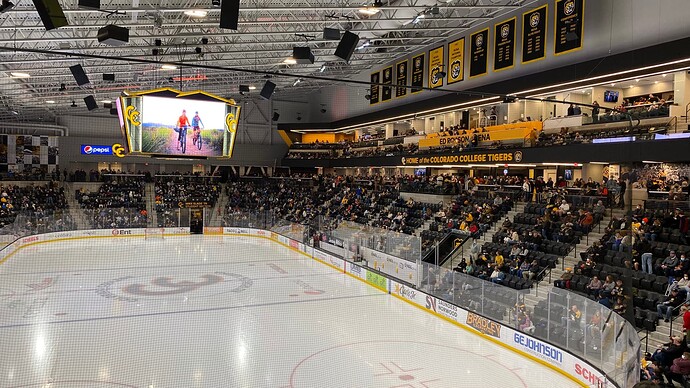 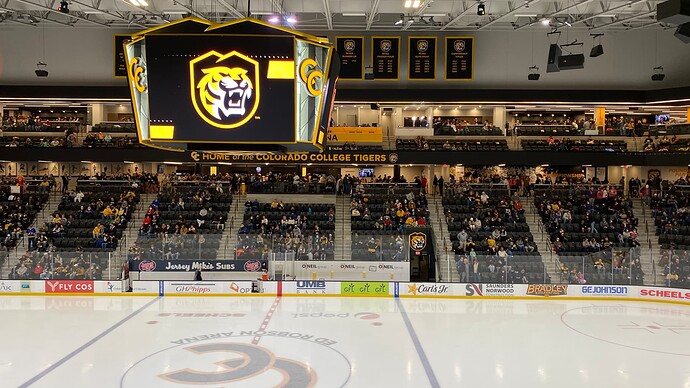 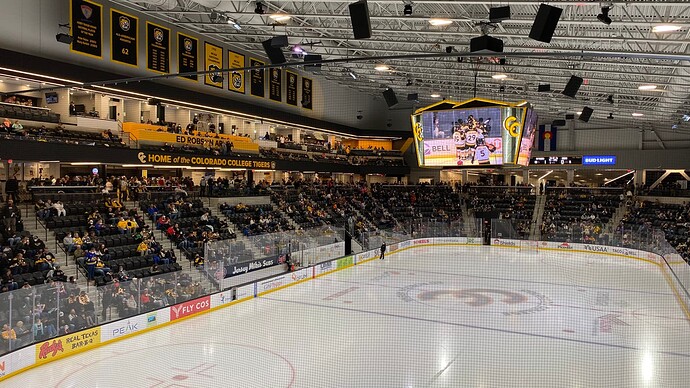 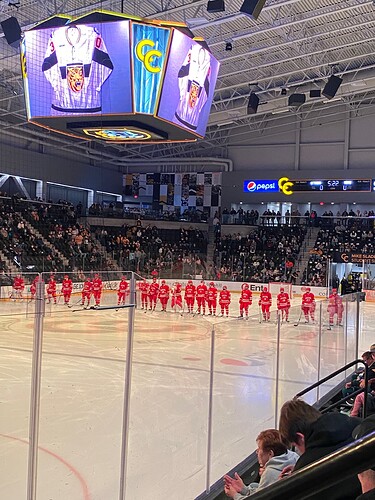 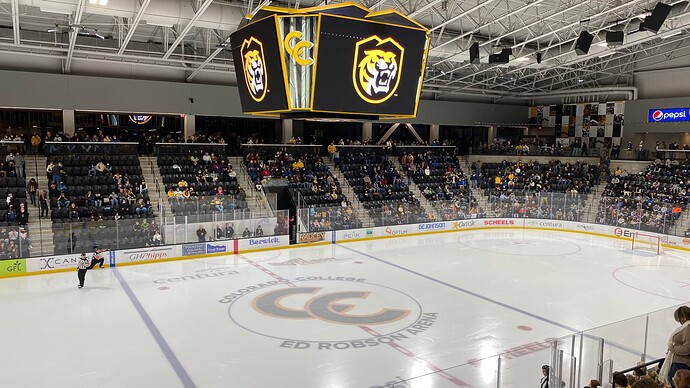 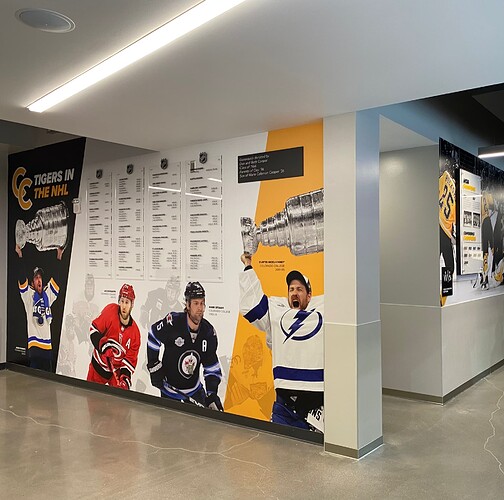 It’s a pretty nice place. Definitely a huge upgrade over world arena, not that it took much. My random thoughts on the arena…
There was no real box office that I could see. We accidentally went to the regular will call instead of the team will call to get our tickets, but both of those were literally just a card table sitting in the entry way. From what I could see, it was just a small lobby at both entrances that fed straight into stairs up into the arena. There’s no designated parking for anyone other than season parking pass holders. They have a small garage attached and can also use a couple of close parking lots. That said, we had no difficulty finding free street parking within a couple of blocks. There’s only one concession stand that I saw for the whole arena (located under the club seats) with a couple of additional beer stands in two of the corners. The line didn’t seem to be too terrible. I sent the teenager to get in line at second intermission while I ran to the bathroom and he was at the counter ordering when I got back. Pretty standard concession stand fare…they were out of the pretzel my kid wanted, but I give them points back for having tasty canned cocktails since I’m not a beer drinker.

There were only two sets of bathrooms that I could see, but the women’s, at least, seemed to be plenty large enough and I didn’t wait in line either time I went. Seats were comfortable, cup holders were tilted and not super convenient. We were in the fourth row, but it really didn’t look like there was a bad seat in the house. With the exception of the club level seats, the seating is all in the lower bowl. There are bar style tables/seating at the top of the bowl most of the way around the arena. Those didn’t appear to be reserved, other than the ones that were with the handicapped spots.

Go get ‘em tonight,Miami!
Is Red Savage playing tonight? If so,I hope he lasts longer than 9 minutes ( was tossed out yesterday)

He and Capstick are both in the lineup. I think since they cracked down on the contact to the head and boarding majors, they don’t get tossed for the next game anymore with a game misconduct penalty.

Exterior shot of the arena 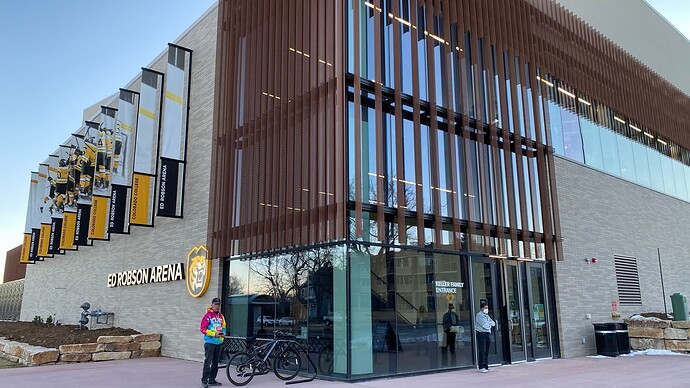 And tonight’s view from our seats, a few rows higher 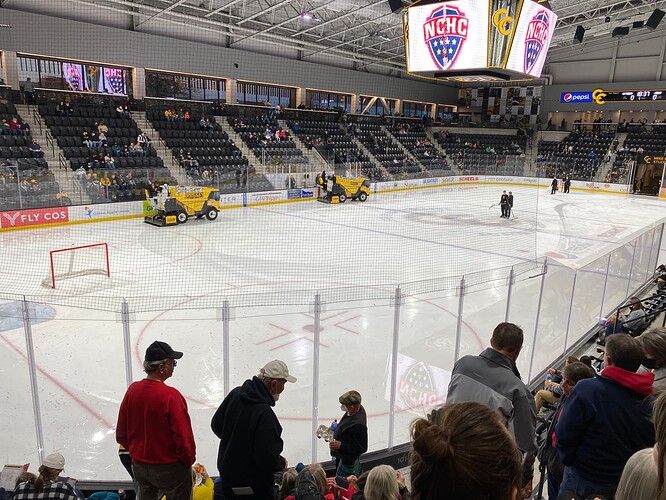 And we are completely surrounded by a youth hockey team…

Down 1-0 after one. And we start the second with three minutes remaining on a 5 minute major (which I actually didn’t see at all…maybe a makeup call for last night?).

I’m on cocktail number two and fortunately I have ibuprofen for the headache I’m getting from the youth hockey team, lol…