Looking through a list of mlb January transactions, I noticed that the Reds released Mike Moustakos, who l think was heading into his third and final year of a guaranteed $64 million deal. Seldom have the Reds paid so much and gotten so little. Maybe the 100 million dollar contract for Homer Bailey?

Tough call but I would lean towards Moustakas.
Moustakas accumulated a WAR of -1.8 over three seasons at a cost of $64 million. Reds essentially got nothing out of the deal, not even one productive season.
Bailey accumulated a WAR of -1.4 over five seasons at a cost of $77 million. He at least had one productive year and in the series of trades they did accumulate some results, though the trades added another $60 million to the total dollar cost. Farmer 2.7 WAR, Puig 0.4 WAR, Bauer 2.6 WAR. Jay Allen was drafted with the compensation pick for Bauer signing with LA, he’s listed as the #12 prospect in the organization but hasn’t shown much in A ball.

Hard to see 2023 being anything other than dreadful for the Reds. Hopefully some bright spots along the way as the young players develop.

They haven’t exactly received a plethora of riches from Votto’s current contract.

Generally the thinking/calculation is that every 1 WAR in baseball is worth about $8m. Votto’s current $225m contract thru 9 of the 10 years has yielded 25 WAR (Fangraphs) or 30 WAR (Baseball Reference). That means he’s been worth $200-$240 million over that span. He’s definitely been worth what they’ve paid him.

That doesn’t even take into account his first 6 seasons when he was paid well BELOW his value.

Do you realize that 30 WAR is a lot? That also includes a negative WAR last season, plus the shortened 2020 season.

Do you think J.T. Realmuto and Trea Turner are really good players? In 9 and 8 years respectively, they both have accumulated 29.7 WAR…and those included their mid-to-late 20’s prime.

Very much aware how WAR works. I am on Baseball Reference Guide daily. That is where all these figures come from. Basically, they got 3 good years out of 9. I’m not making any of the stats up.

The Votto contract doesn’t really bother me much. You always knew there was going to be some falloff towards the end, there’s not a good track record of players getting better after 35. This is the price of retaining a generational player for their entire career, you underpay in the beginning and overpay at the end.

With Rolen being inducted the Reds have had a Hall of Famer on the roster for every season since 1956! 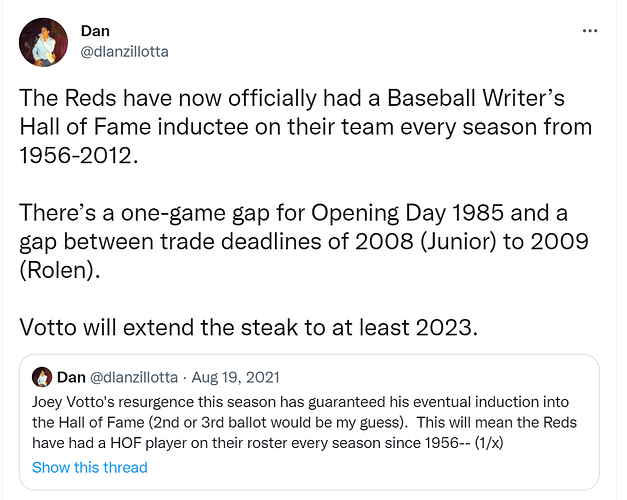 The Brewers are still laughing about this deal,no doubt.