First home series of the year. 7 of the first 8 were on the road, with just the one home game against BGSU.

UND is 6-3. They split series with Bemidji St, Quinnipiac and lost a neutral site game against Penn St.

0-1 after 1. SOG are an abysmal 3-14. Allowed back to back power plays, the second for too many men and UND capitalized on it. 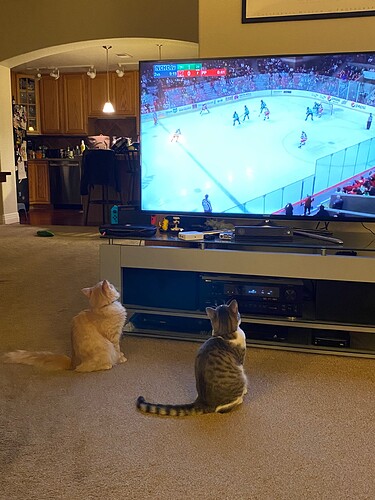 The kitties enjoyed the power play. Fortunately they lost interest before that second NoDak goal…

Played slightly better in the 2nd but 0-2 now

Honestly, we’re lucky to only be down 2 goals, considering we’re getting outshot 25-10.

Power play goal by Moulton gets us back within 2 with 6:40 to play.

4-1 final with an empty netter. Not a great showing for the first home game.

1-2 midway through the first. Nice steal by Pletzke that led to a breakaway and unassisted goal.

And UND scores again to make it 1-3

Regush with a nice goal on the powerplay to make it 2-3 with 3 minutes left in the first. 2 goals on just 3 SOG

That was a pretty goal by Barbolini from Regush on the two man advantage. It’s kind of hard to believe that we’re only down one goal, it seems like the score should be much more lopsided. Not a lot of defense on either side tonight!

3-4 at the end of 2. Seems like we’re playing a bit better tonight.

Are we playing better or is ND playing worse?

Either way, we’re still in the game at least!

Final 5-4 NoDak. I do think we played better tonight, but man it would have been nice to get a split before heading to Denver and playing at altitude next weekend.