Lairy I assume had forced shots, Dalonte was definitely not 20 and 10 Dalonte…Vander Plas a nightmare matchup, as expected.

Dae Dae out of control?

vander plas had 20 in the first half yet only 6 in the second? i shut the game off when it was something like 64 - 38 … bile churning performance

Yeah…I just see no fight in this program. Watch the Western post game…at end there was a shout out about Green team is next…and the emotion in locker room was limp.

Maybe our team is not healthy or full strength…but OU is playing without Dwight Wilson…yet here we are 20+ points worse than our “rival” on our home court… in year 5 of Owens…and nearly 15 years in of being generally not that competitive as a bball program (a sport that should be the easiest to turnaround).

OU has beaten only two teams this year like this…a DII/NAIA school, struggling Mount and then this.

David Sayler is on verge of legacy as AD that killed bball and hockey @ Miami. I’m at a loss…figured with our experience and some new pieces this year had a chance, but instead a middling MAC team.

At least we averaged one assist every five minutes. This team runs no offense. It’s hilarious.

Add in the Ole defense…and you start to wonder how long Jack been coaching?

I somehow got the ESPN+ broadcast. OU had 72 points at the 10 minute mark of the 2nd half. Their coach took his foot off the gas. The Bobkittens should have dropped over 100, easily

And yet, Saylor was given a contract extension, just like Owens.

Sayler did not kill basketball lol. What a ridiculous statement.

Without DS, we’d be going to play 4-5 P5 schools every November/December and then getting railed in MAC play. Basketball has been dying a slow death for 15 years, starting with Bates.

Now we’re playing a crummy OOC schedule, losing regularly to ho-hum programs in the process and then getting slammed by the better MAC teams. “Pick your poison”.

Says an idiot, LOL…at this point those old schedules look like money makers.

The easier scheduling is not producing functional wins (just DIII)!

In all seriousness…as I said, he’s on the verge as he just extended a HC that in year 5 offers “we just did not play with energy against our rival (20+ point loss)”…also, there’s still very little institutional support for MBBall, nine years later…and while that is not ALL on DS by any means…he’s the AD. Yes, Bates sent us on our way, but the curtain is about to drop if we don’t start looking like OU soon.

I’m not seeing real improvement from this staff…so if we stay this current course, we may be at Cooper level in the next two three years, that’s a shit show of 15 years of irrelevance.

Look at Miami BBALL record for those eight to nine years under DS, (even five years if you want to go with Jack Ownens hire). Change in scheduling yielded us maybe four to five more wins per year (however, many of them against DIII, so are they really wins at all?).

In comparison, Ohio U has had three to four coaches in the period DS has been at Miami, with one truly Miami like season and two borderline decent Miami seasons…with rest being in the category of what’s that 20 mean in the record?

Miami BB seems to “play down” to the lowest 2-4 teams in its OOC schedule, convince themselves that effort will suffice…and then carries that “ho-hum-Jack-another-three” mindset into the MAC season.

I remember past Miami BB coaches yanking kids out of games after committing TOs, making a lazy pass, or stupid fouls and making them sit for a few minutes (and sometimes longer) while they were “instructed” about why they were sitting and not playing. It seemed to work then; I wonder why it isn’t done more often these days.

Miami has not been good vs. MAC East opponents over the past 4+ years. Since the 2017-18 season, here is Miami vs. the historical top of the MAC East:

Aiming for the magical “Cooper 13!”

Our conference, only numbers are not great (not terrible), shared the ball better early in the season, defense trending down…but if Miami is to salvage season…this is the time (home and road games that are winnable)…as depressing as it is that Miami can lay down and be 20 to 30 point dogs to a Bobcat, this is it. 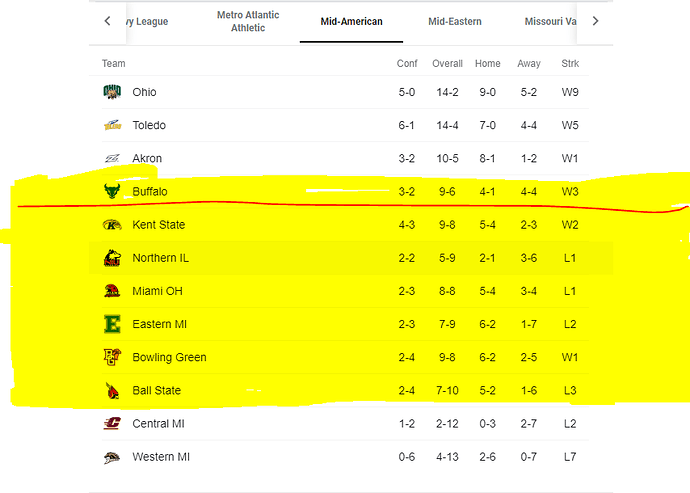 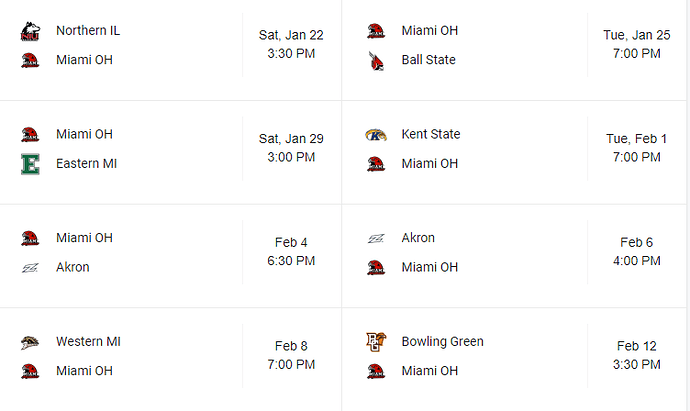 We are likely in the top 8 in the MAC, but at this stage, that’s an awfully low bar to set.

But definitely in the Top 12 in the MAC…that should cover any eventuality…I think.

Do all get to go to tourney this year?

8 have “first round byes” …how’s it work this year?

Only the top 8 qualify. No 1st round campus site games.