Interesting info for March social media interactions. MU 137/150 with quite a few FCS programs ahead. Just a single data point (or several) to indicate how MU is reaching the masses. 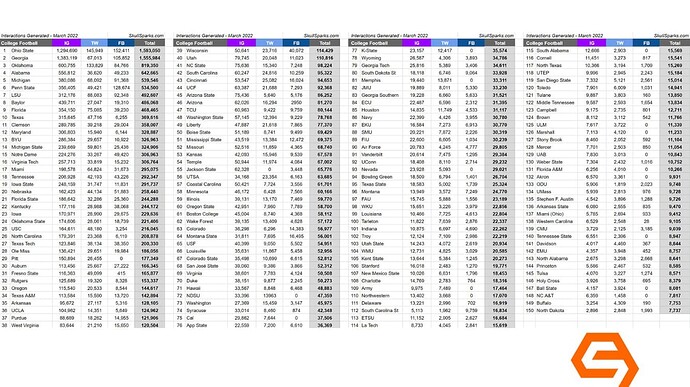 It isn’t due to a lack of effort.

Important to note that from a marketing perspective it’s great to get engagements on social media, but it’s not necessarily an effective measurement by itself; “success” depends on your campaign goals and how your audience is reacting.

Also, wtf is Montana State doing to get in the 50s? I get why Jackson State is so high because of Deion, but that’s bizarre.

Don’t even see the Bobcats…so take that, kittens! Hughes Net in the Appalachia slow to upload I guess.

PS. Maybe I missed them on there somewhere?

It’s from March. That means the schools with basketball teams playing late into the year will have an advantage. See what happens in April with football content and the coaching announcement.

Montana State played in (and lost) the FCS National Championship to North Dakota State. Several years ago, while in Bozeman in the fall, my wife and I attended a MSU home football game. The stadium was sold out and the fans were loud. They have a nice pre-game vibe to go along with the day.

Advantage yes, but clearly it can doesn’t mean success or that lesser programs can overcome the disadvantage. Davidson/Akron made the tourney and are towards the very bottom, New Mexico State/Memphis/Houston won tourney games and are in the bottom-half, and you even have Maryland in the Top 15 despite not making the tourney/having a meh football program. Though as I stated earlier, we shouldn’t jump to conclusions without context too much based on these numbers.

I bet Penn State makes a big jump in the April rankings with the JoePa 30 for 30 coming up in a couple of weeks.

There aren’t any professional or high major teams in Montana for them to have to compete against and the state has a bigger population than most people realize.

Akron has a declining population and tons of local competition. Davidson is a tiny private college that just happens to be good at basketball.