Let me preface this by saying that I enjoy gnashing my teeth over every non-conference loss as much as the next hawktalker! But, I believe some of our concerns are misplaced. Everyone is adapting to the changes in the college football landscape caused by NIL. I believe Miami and the MAC will be impacted relatively little.

As someone who has avidly followed recruiting for quite a while( God help me I need a hobby!) I believe the MAC’s position in the recruitment wars is unchanged. Successful Ohio MAC programs have always lived and died by their ability to convince the 60th-90th best scholastic players in Ohio( and similarly talented players in the MAC footprint) that they are the best option within the conference. Players 1-30 have traditionally gone to a combination of Ohio State , Michigan, Notre Dame and Alabama. Players 31 -60 have been a combination of second tier Big 10, SEC and UC with an occasional MAC recruit thrown in. While the emergence of both UC and UK as legitimate challengers for elite recruits is novel it doesn’t impact us as much as might be thought.

The real threat to Miami and MAC football competitiveness with the P5 has nothing to do with NIL changes. It is the raw particpation numbers in high school football. High school football participation peaked at 1.12 million in 2008. Since then it has decreased at a rate of around 3% per year. We are now well below 1 million. The more kids who play, the less the talent gulf is between the top half of one percent and the bottom half of the one percent.

The problem is particularly acute for the MAC as opposed to the SunBelt. Historically the MAC has been better but the participation rates have dropped in the MAC states far more than in the southern states that form the SunBelts’ core. Going forward I expect Miami and MAC competitors to offer scholarships to many more young men from below the Mason-Dixon line. Let us hope that our reputation travels well!

My apologies, i know that by it’s very length this post is attempting not to be read!

Good insights.
Don’t make this your last post on this board.

Thank you, it won’t be. I am sure that some of our fellow posters have sleeping issues and i am here to offer my services as a literary sedative.

Nicely said, MJ. I agree, and look forward to hearing more from you.

Because of those trends and because of other demographic factors like explosive growth in southern states compared to population atrophy in the Midwest, the SEC will continue to be the alpha dog of FBS football. I see the Belt as becoming the SEC equivalent in G5. These trends may have been contributing factors to MTSU’s decision to chain itself to WKU and stay in CUSA.

MTSU also just fits a lot better in a “southern” conference like CUSA or the Sun Belt. WKU would be a great fit for the MAC, but I can see why MTSU would only join as a last resort.

I’d argue that the original post might not be giving enough credit to the threat of NIL. When there’s (effectively) a paycheck separating P5 and G5 schools, most players are going to take the paycheck. A player who might choose a G5 over a P5 for playing time and educational fit has a lot more incentive to fight for a more lucrative spot at a P5 school if there’s the potential to rake in a lot of NIL.

Any sorts of numbers out there yet on NIL averages/expectations for a 3 star that’s going to a mid to lower level P5 school?

I’m just not sure that an incoming freshman is going to get enough NIL thrown his was at a lower level P5 to make a big difference as to which school he goes to. I think maybe the bigger picture might be a P5 where he sits or a G5 where he’ll have a better chance to play.

Then if he plays at G5 and shows he has “it” he can move to P5 and maybe/hopefully/probably get enough NIL to make a difference.

The biggest thing that’s going to affect population of states is climate. Forget declining football interest for a second, although it absolutely matters. If things keep going the way they are, there are places that may not have outdoor sports as we know them. It’s 114 in Livermore Ca today. That’s in The Bay Area. Not Death Valley! How on Earth do you play football in those temps?

Perhaps it becomes more of a winter season sport. The college season - fifty years ago - started the third weekend of September. Teams played 10 games instead of 12. The regular season traditionally ended on Thanksgiving weekend. It was truly a fall sport. It was 102 at the Rose Bowl when BG and UCLA kicked off last Saturday. It was about the same for the opening of San Diego State’s new stadium that afternoon. That’s the kind of weather only Arizona State is conditioned to playing in.

Might wanna check some of the NIL deals larger P5 schools have. Tennessee (or Texas or someone) is giving every single offensive lineman $50,000. There are quite a few 3 stars and walk ons included

The Texas OL NIL deal is the exception and it doesn’t cover walk-ons. I’d be very surprised if there is more than one or two 3 star recruits in the Texas OL group. More to the point, I was referring to incoming freshmen 3 star recruits.

Well this guy was a 3-star…ducks and runs. 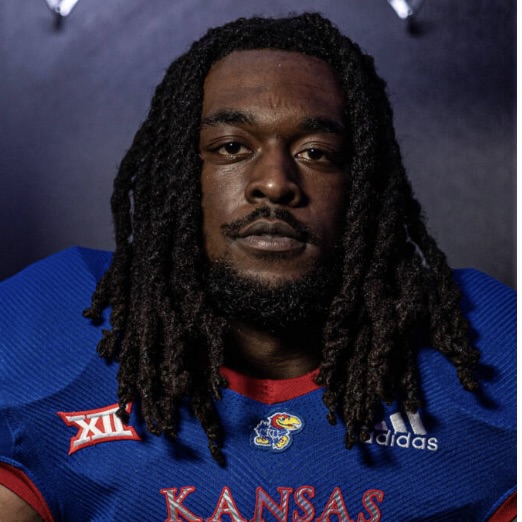 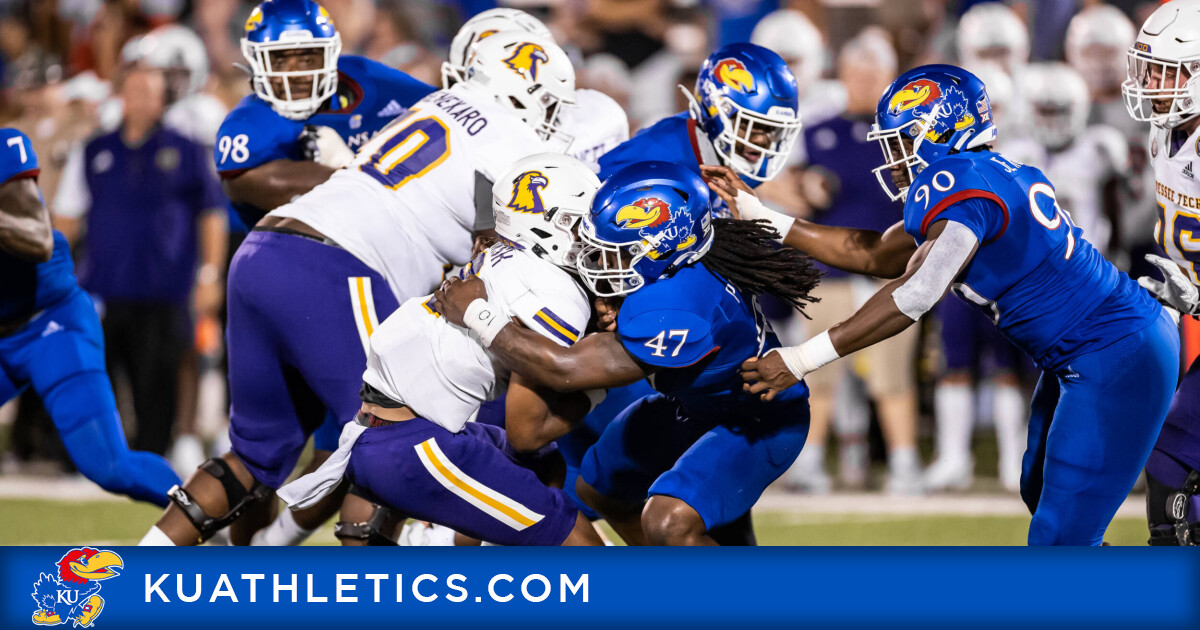 Redshirt junior defensive end Lonnie Phelps was named the Big 12 Conference Defensive Player of the Week, the league office announced on Monday, after making his presence known in his KU debut with 7 tackles, 3.0 sacks and 4.0 tackles-for-loss.

Conversely, Kam Butler has not really changed much in NIL valuation.

We definitely have problems!!!

Absolutely not remotely close to real money. The website has some sort of formula to come up with valuations but it’s absurd to think Lonnie is getting 400K. I don’t even think it’s possible to come up with a remotely accurate formula when earning potential is so dependent on how many rich alumni a particular school has. Looking at his twitter/instagram I don’t see a single NIL related post, except for a site with some branded clothing for sale.

What high school did Kansas beat for their one of few wins this season?

FCS Tennessee Tech - a team we beat in 2019 on our way to bowl eligibility. TT is probably getting tired of seeing Lonnie Phelps. Don’t forget Kansas beat Texas in Austin last year. We can’t dis the Jayhawks anymore until we do something similar.

CMU blown out at home by South Alabama. BG losing at home to EKU. Ohio and Akron obliterated in buy games. We’re looking unconvincing against Robert Morris. That’s after a horrendous week 1 for the conference. Are we bad, or is it just impossible to be good in this conference any more?