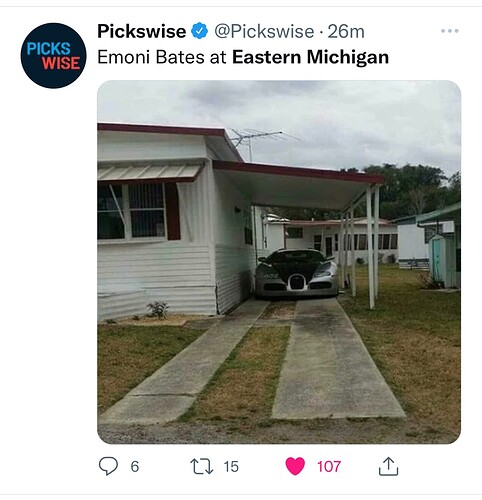 They bring back Farrakhan and also added transfers from Georgetown and Providence. Could be a pretty good team next year.

I’ll be surprised if he does.

Who’s paying the NIL money to these players at EMU?

Maybe his Dad will stay out of the picture. Probably not.

Now that players are paid, I think the NCAA should not give them the unlimited ability to transfer at their whim. In other professions, a worker signs a contract at their employer to provide his or her services for a set duration of time. In college athletics, athletes can go from school to school to the highest bidder carte blanche. There used to be a one year wait that an athlete had to sit out before being able to play. At the very least, I think they should reinstate that rule.

In other professions, a worker signs a contract at their employer to provide his or her services for a set duration of time.

Are there states that don’t have at-will employment these days?

Bates is from Ypsilanti. Might be part of it. But I could be wrong.

I agree. If not this, something must be done to stabilize things, which now threaten the future of college athletics.

This may have been the only place that would take him. Michigan didn’t want him. Even Louisville, who can and usually takes anyone talented, didn’t want him. I hope he can find some stability. His effort to get his high school a state championship when he was a freshman was incredible. He showed off a lot of tools. It seems that since he went to play for his dad his junior year, his development stopped, and he’s lost confidence. He shouldn’t have reclassified. Memphis tried to turn him into a point guard when he got there. He turned the ball over a lot. And athletically he didn’t develop. Before his freshman year, he went through a pro day like workout and his wingspan measured noticeably short of his height and he demonstrated a 24" vertical. So how good is he right now? What role does his dad want to play? That’s a lot of risk. Hopefully he plays with limited distractions.

Ha! I was referring more to non-amatuer sports in general. Where a player signs with a team for a duration of time, and then becomes a free agent when that time is up. I would prefer if schools could sign players to a similar type of deal. Or at the very least reinstall the one year sit out time for transferring. As it is now, any school outside of the Big ten or SEC has very little chance to keep a star player for longer than one season under this setup. I mean, MAC schools and the like have always been a farm system for the bigger schools to some extent, but the current NIL system paired with the transfer portal really kicks it up exponentially.

Bates is from Ypsilanti. Played HS ball in public school until dad decided to create a prep school and invite other top rated players to join such as La Lumiere and many other prep schools.

Just got arrested on multiple felony gun charges, so I’m guessing not.

He’s pleading to misdemeanors. Back to practice with the EMU basketball team now.

Thank goodness. What would the MAC do without him???