I’ll be there — I almost forgot to buy tickets until yesterday. Fingers crossed we don’t get shelled like last time Miami played away to DU. I’m just hoping for a split and not getting embarrassed in the other game.

I am there with 6 others on Saturday, including Gaye B!

Yep! I’ll be there w/Mike’s group tomorrow night, and tonight with my kiddo (aka awkward teenager) and senior year roomie! I’m mostly just hoping to not be totally embarrassed, but I feel like we usually show up to play @ DU regardless of how well our season’s going. Of course, that was back in the days of the Rico/Gwoz rivalry, so who knows now…

Years ago we beat DU in Gwoz’s 1000th game and I somehow had the seat on the glass immediately next to the DU bench. After spending much time in the student section in Goggin where we often tried to grab those seats, so of course I didn’t shut up towards the bench the entire game. When DU was filing down the tunnel after the game, I yelled genuinely “Congrats on 1000 games” and he gave me a look like “WTF you just spent 2+ hours chirping us” and kept walking.

That was a good DU team too. They had a few NHL players, Zucker, Beau Bennett (real talented player, just made of glass), and the Shore brothers. Then again, that was a good Miami team too with a number of guy who stuck in the NHL.

Looks like both are TV games for Altitude Sports (DirecTV 681). The alternate feed/channel tonight and main channel tomorrow.

Tied after 1 at Magness? I’ll take it!

The crowd is pretty sparse tonight. Fall break started today, so maybe that’s part of it. Although the section that the alumni tickets were in only had a handful of seats available when I bought ours a week ago and it’s probably a third occupied at best.

Could hear the Miami fans on TV after they tied it 1-1.

100% agree. The first was decent outside of that initial DU goal but we can’t keep taking that many penalties with our subpar penalty kill. Persson made a few spectacular saves that kept us in the game for awhile…but that five hole goal was not good. As usual, a totally uneven performance. 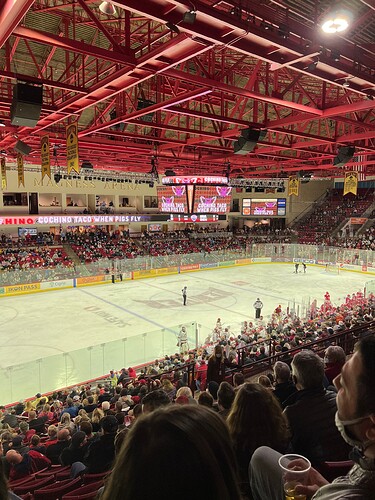 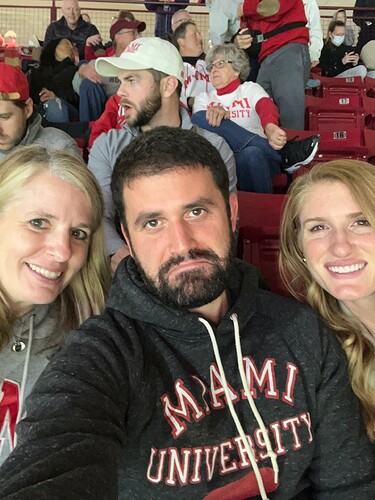 Well, this is just embarrassing…but at least we get free burgers since they scored six goals?

I left after the teddy bear toss. I think DU had as many goals as we had shots at that point.

DU sold me seats that did not exist. My seats were 15 and 16 in a row. The row ended at 14. So did the adjacent couple rows. The usher just said “there’s plenty of empty seats, right?” which was fair enough. So that worked out ok at least.

I’m trying to figure out how much longer it makes sense for Miami to be in a conference with all (but 1) teams west of the Mississippi. No natural rivals, lots of travel expense, and being the conference doormat to boot.

i think the verdict is that it is too high of an exit fee. remember when everyone on here was joking about wmu’s marketing campaign to get the last nchc spot?

we are following the trajectory of cc, but a few years behind them. they had a good program with deep frozen four runs then they fell off a cliff and never climbed back. they have shown few signs of ever coming back to a strong program.

Never did in the first place….

At the time, the options were 1) joining college hockey’s power conference after going to back-to-back Frozen Fours, 2) the WCHA – which accepted both Alaska schools and Huntsville, the ensuing travel costs of which essentially put it out of business last year – or 3) independence.