Per Big Game Boomer on Twitter. We aren’t hostile. Miami fans are non-existent! 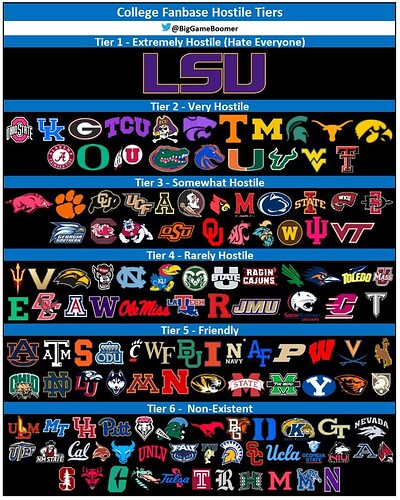 Such a joke, no MAC team should be above Tier 5

Places Miami just about where many of us think we’ve sunken to. Can’t believe they’ve got a couple MAC fan bases in the same category as the Tar Heels and Washington Huskies.

I’d like to know the metrics behind the rankings or different hostility levels. Number of assaults in the stands? Number of arrests for drunk and disorderly behavior inside and outside the stadium? The amount of property damage in dollars inside the stadium, in surrounding neighborhoods, or to vehicles with the opposing team’s elements? Number of couches set on fire or dumpsters over turned? Or is it all subjective?

I’m guessing the latter - pulled it out of his arse.

Big Game Boomer? It’s pulled out of his ass for Twitter and message board clicks.

Big Game Boomer is the biggest loser, clown on Twitter. Absolute joke of an account. Don’t be a sucker for it