It is reported that Jaylon Bester will return in '22. The rb room just got better.

Here is the article where he talks about returning for another season: 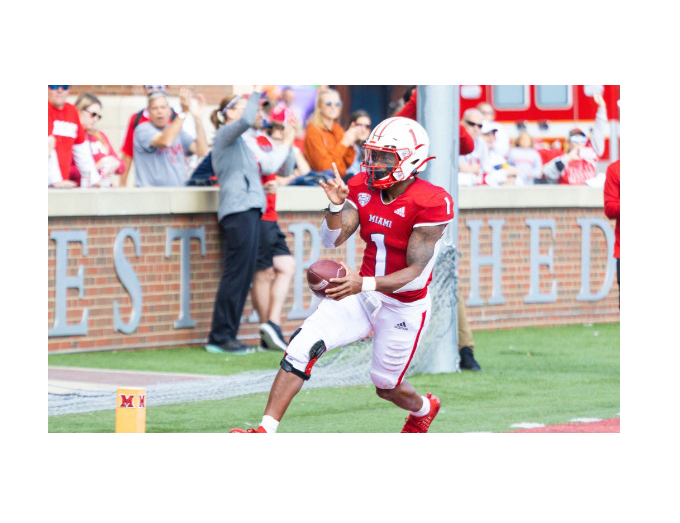 Jaylon Bester will return to Miami football in 2022

On Nov. 18, his 23rd birthday, Miami University running back Jaylon Bester came to a crossroads. After 18 years of playing football, Bester, in his fifth year as a running back on the Miami football team, had to make a decision. Would he forgo the...

I’m glad Jaylon is coming back, but that’s getting to be a crowded RB room. Guys like Kevin Davis and Keyon Mozee have filled Bester’s roll and done a pretty good job of it. Hopefully the two surgeries he’s had won’t prevent him from getting back to the ‘19 version of himself. Because he’s going to need to in order to see touches. Regardless, I know he’s a great leader and his teammates will be glad to have him back.

You think they’ll look into moving 1-2 of those guys to WR and play the slot?

Davis I would think will be the full on Hybrid guy…WR/with some run plays (jets, etc). Mozee just does not seem like a receiver to me…I know he spent some time there, he’s built similar to Jalen Walker, but looks at home running the ball to me.

RBs are still full, unless someone else is headed out:

Bester, Mozee, Tracy and Afari (who know where his weight is next year, might be a 5-11/6-0 210 back)…have not even mentioned Tyre Shelton yet (not sure his health status or if he’s hanging it up or looking elsewhere, still has two+ years of eligibility).

I assume Afari redshirted and might have to wait for his time…but he comes from a talented football family…his brother headed to UC, wonder if Afari (Miami’s) gets looks from UC?

Or maybe Afari is going to be a receiver?

Afari’s brother is actually headed to UK. Pretty good recruiting job by Stoops to pull him out of Cincy.

I actually thought David Afari was going to assume the role that Tracy ended up taking. I was really impressed with his running early in the season. Surprised that the coaches shut him down. Hopefully he’s bought in to the plan they have for him, because otherwise he might look elsewhere. It’s a log jam, so I wouldn’t be surprised if someone (maybe Shelton) goes. Probably why we haven’t taken a RB in the ‘22 class yet.

Yeah…Afair is talented…so not sure what’s up there…hopefully we don’t lose him…looked good running a WR go route in link.

great news. hope he will be healthy.

What about Shelton and Johnson running backs

Johnson left midway thru the season this year

As noted Johnson left or hung up cleats.

Shelton was at the bowl.He was in the pic with the other rbs, wearing his jersey and a pair of shorts. Love to get him back healthy.

Thought Johnson got hurt why he didn’t play all year

Not the best vid quality off of Afari’s feed…but you can see glimpse of special back that can be shifty, power and catch.

Hope this kid gets his shot at Miami! Seems like he’s maybe putting it out there…

PS Davion Johnson is not found on roster.

Ha …think he would have sights on a bit bigger than us.

Maybe one from Melbourne would think he’s transferring to the other Miami.