Through Tuesday’s (1/10) games, Kent is 3-0, and everyone else is either 2-1 or 1-2. Remember, only the top 8 make the conference tournament. Could be a tight, exciting MAC season. Not that it usually isn’t.

Three of our next 4 are on the road. Would like to see us beat NIU at home (we probably should), and steal one on the road (BSU, BG, or Akron). Won’t be easy, but we’ve been playing better of late.

I have to disagree on that. The MAC is the 18th best league according to Sagarin. That is much lower than its historical placing of between 11-15. We are below the Southern League for example- not good

I’m not saying the ranking improved (I should have beeen clearer) more that the teams look more competitive. Granted my sample size isn’t great.

@Redsea I don’t recall the MAC ever being 11-15 on Sagarin, only RPI. I would tend to agree with @YellowNumber5 that the MAC is much improved this season. The issue is that the improvement is mostly focused around the top teams. Steele mentioned in his presser that the MAC has a lot of parity, but few conferences have as big of a gap as we have from Kent at #50 to EMU at #324. The only bigger gap I could find was the colonial with Charleston at #53 and Monmouth at #358.

Let’s talk Kent for a moment. They’re currently 13-3 (3-0) with no bad losses, but also no notable wins. What would they have to go in the MAC to get at-large consideration? If they finish 16-2 and lost in the MACC, they’re at 28-6. That’s certainly a great record, but how might the committee view them without a signature win? Granted, I know this was an extreme example, but 25-3 Utah St. was left out in '04 due to a weak schedule.

Kent St seems like a team that would really benefit from Bracketbusters still being around.

I have been watching MAC basketball for a long time (ha-ha). I will see how far back Sagarin goes but 15 was a really bad season 20 years ago

Here you go RS (Sagarin 2000-2015…sample size of your criteria - several years hit the mark, as high as 9, then as you noted in your seasons)…how little “they” know 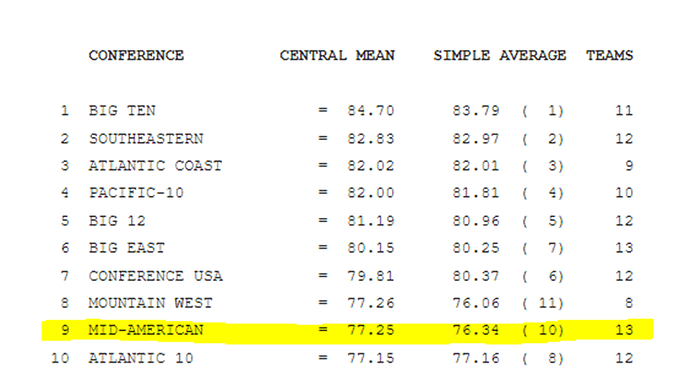 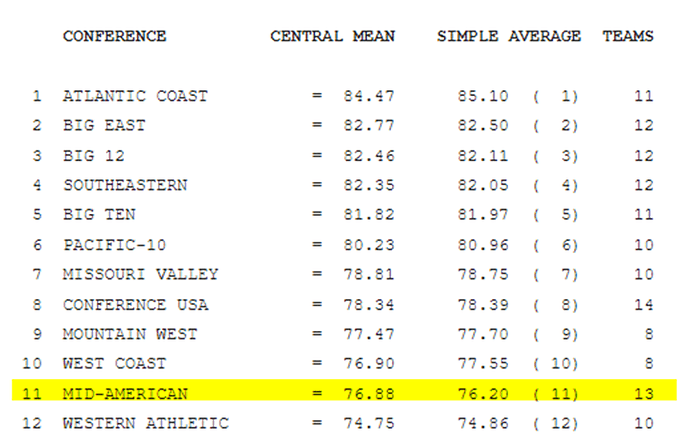 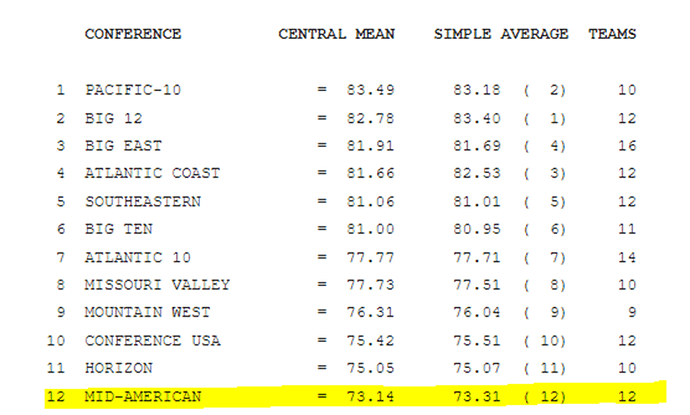 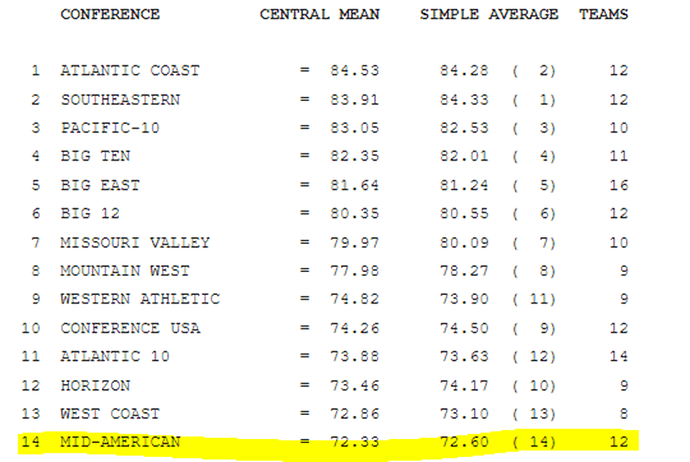 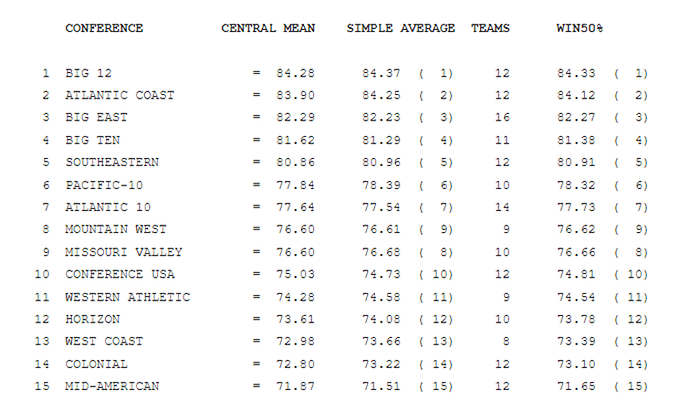 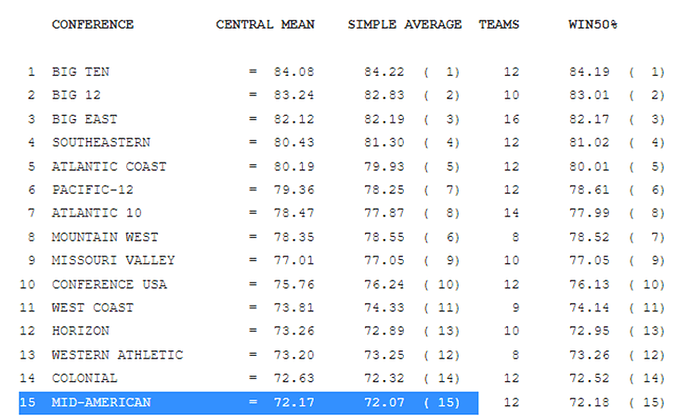 PS. Nice win against Kent, still giving away points at end of half/game…but team has shown already, at full strength, that maybe they can compete with best of the MAC. Anderson, please stay healthy.

The conversation was around if the MAC was improved this year. Nothing you posted includes the data for 21/22, which would answer the question. Why are you snagging data that’s over two decades old in a thread about this season?

Everybody knows where the conference sat historically. Now to answer the question on the table:

The MAC has gone up two spots from its previous ranking of #20, which is where it also sat for NET. 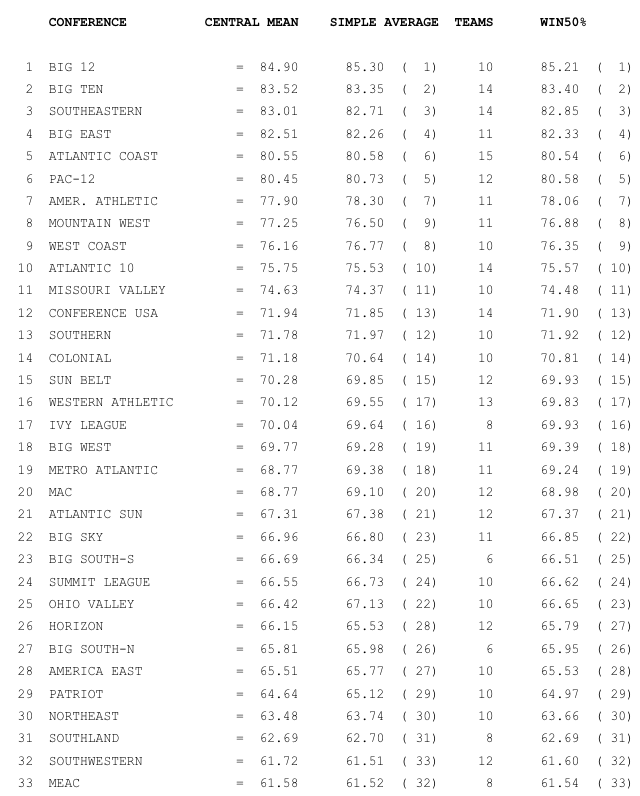 Interestingly, @Redsea, Southern’s spot above us is a pretty significant decline for them from last year. Other things worth noting: there are no teams lower than 300, which is a decent step up from last year when we had two there, and the current rankings would put Miami in 8th place, just sneaking into the tourney.

Maybe I am off base here, but the MAC being 20/33 conferences is nothing to be excited about. That puts the MAC solidly in the bottom half of basketball conferences in the country. I would like to see the MAC always in the top 15, and ideally, in the same territory as the MVC.

I don’t think anyone was excited about being #20 last year, I think what’s exciting is the improvement from both the top and bottom teams this year (~30 spots better). The MAC has the ability to return to being a top 10 conference, but it needs teams like Buffalo and Miami to be solid as well. Kent and Toledo are the only two consistent teams, and to take the next step that has to change. Buffalo seems to be making a return and I think Miami has shown they’re ready to take a significant step forward.

Yellow said the MaC is much improved in hoops. He never said but maybe meant year over year

Jive says we are only talking about this year

Jive trust me when I tell you MAC basketball is historically bad with one good team and two ok teams. We used to have 8 teams as good as this years Toledo.

When I went to the mac semis in 1997 - I think there were 5 NBA players (wally,newble,Boykins, Dial and maybe Wells or a BG guy)

I’m a degenerate gambler. Not a Data scientist. I simply look at the games and for whatever kockamany reason, the teams seem better. As I tell the thousands who are massed outside my door, don’t follow me. We’re all individuals. Wait, that was Bryan in The Life of Bryan.

I’m sorry I should’ve said within the last 5 years. After looking, the MAC East did hit a high-water mark of 9, mostly thanks to Buffalo.

Easy to forget we’re recruiting kids who weren’t alive the last time Miami went dancing. If it wasn’t in the last 5 years, good chance they don’t remember/care. I don’t want to act like Nebraska and talk about decades ago constantly.

OU leading Kent by one at the half. Dwayne Wilson III has all but 10 of OU’s points. Will be fun to see him battle with Anderson.

He seems to have one move (turned the game on late), but Kent’s bigs are giving it to him every possession.