Moorehawk - It’s still considered one of the most fertile recruiting areas in the country. Compare SW Ohio/ Northern Kentucky to the areas where East Carolina, Wyoming, Utah State or Old Dominion are located.And while someplace like Georgia Southern is in a fertile recruiting area, the SEC, ACC, Sun Belt and everyone up north is competing for the resources there, too. There are a ton of FBS football players available between Lexington and Dayton. We don’t have to get on an airplane to talk to them. Their parents live there and many would like to see their kids play locally. We should get our share of them. I don’t think we are right now. Cincinnati has 39 on its roster from that specific area. We have 15.

Over the last 20 years UC has spent huge amounts of money on football and has developed a regular top 20 type of program and is now moving into a Power 5 conference which will have an automatic bid to the college football playoffs, and UC coming in has a program equal to any of the Big 12 teams. We used to be the #2 school in the state of Ohio, as most players would stay in state. Now we are way down the list of priority for even players in our own back yard. Look at Pace, for instance. That is certainly not the fault of Chuck either. Administration has done a poor job of stepping up to the plate to build on our past success in athletics. Blame should start at the top with the Board of Trustees and the Presidents.

The state of Ohio is also in great decline when you look at population, average income, average education levels, etc. We are led by a backwards, stupid state legislation whose only goals seem to be cutting taxes on the wealthy, ramming through extreme right wing social laws, and turning OSU into a football monster. Ohio seems on the path to the bottom as we try to catch up (down)to Alabama. Ohio is in decline.

Tell us how you really feel, Dick.

I know. Not the place for this, but it does effect what we are discussing.

Ohio might be going to Hell in a hand basket but it still produces a lot of FBS football players. Everybody is recruiting nationwide these days, even FCS and lower division programs. Our roster is now less than 25% from Ohio. We simply have to be sure we get a fair share of local players.

We are led by a backwards, stupid state legislation whose only goals seem to be cutting taxes on the wealthy, ramming through extreme right wing social laws

The University System of Ohio put the nail in the coffin. The great equalizer of higher ed throughout the state. So long as the scales tipped OSU’s way, all would be well.

As for #2 in Ohio, I’m not so sure. It has always been #1 in football followed by whichever MAC team pieced together the best team du jour. Caveat - Miami sustained flashes of supremacy that exceeded what others could accomplish.

Look at other states - they have their land grant university (example: Michigan State) + their traditional academic flagship (U of M). Take North Carolina - NC State and UNC. Indiana - IU and Purdue. Ohio, for whatever reason, has the land grant and then a bunch of mid-majors who are marginalized (and, starting in 2007, done so in a more formalized way).

Yes, the administration and board of directors have not helped. They are more concerned with other things. Not sure how MU ever regains the true stature and standing it had in the state. Making matters worse, today’s student athlete generally does not care about tradition, discipline, service, team, etc. It is about swagger, getting what you can get for doing the things you should be doing anyways, posing for a camera while making stupid hand gestures, and being propped up and praised. Sorry, it is a different world today and fewer and fewer give a hoot about our tradition.

Have to reach back quite a few years, but from the 40’s through the 70’s a pretty good case could be made we were #2. Others had some good runs…Toledo with the Chuck Ealey years…UC was good 3 years after they stole Sid Gillman away from Miami in the mid 40’s (and taking many of our players), but I would argue we were the most consistent winner outside of the Buckeyes…from end of WW2 until 1976, not one losing year. Had an incredible 5 year run in the 50’s under Ara, (like .850 winning %) some good teams in the 60’s and of course our great teams of the 70’s.

?
The Virginia Beach area is one of the most fertile recruiting areas in the country. Virginia Tech agreed to a running home and home series with Old Dominion specifically to be able to regularly play in front of recruits there. Another team on your list, ECU, is not that far from there and also pulls from the Charlotte and Raleigh metro areas.

Yes, but ECU is out in the middle of nowhere and has to recruit against four ACC P5 programs in-state. We don’t have that issue to address.

I have my own political views but this is not the place to express them. Beat NW

Those programs have won some big out of conference games that we have not done. However, our program under Chuck is clearly superior to those programs.

Sorry, outside of the facilities upgrade, nothing about the program under Chuck is superior to Randy Walker’s program. Not his coaching record, not his staff, not his recruiting, not the team’s competitive will, not Walker’s lack of a MAC title. Nothing.

In fact, given the facilities upgrade he was gifted and the sorry state of the league, compared to the 90’s teams Walker was competing against, Chuck’s lack of success is even more glaring.

Ceteris paribus, a Randy Walker coached Miami team over the last 8 years would be dominating the MAC now and at least be respectable vs OOC.

JDad, If you look at the comment that you are quoting, it is in reply to Skins comments about EMU, BG, and Akron. You can also look back and find a quote where I said that Randy was a better coach than Chuck. I basically agree with what you just said.

How come no one ever says that? It’s like “we agree to disagree” is the only answer. So strange.

So noted. I took it as a response to HawkLbacker’s analysis of Walker v Chuck in the post immediately before yours. I agree with you then on the current comparison , but that’s not saying much given the present state of affairs.

Both, if legally can be interpreted as the wider college football landscape. The economics speaks for itself. 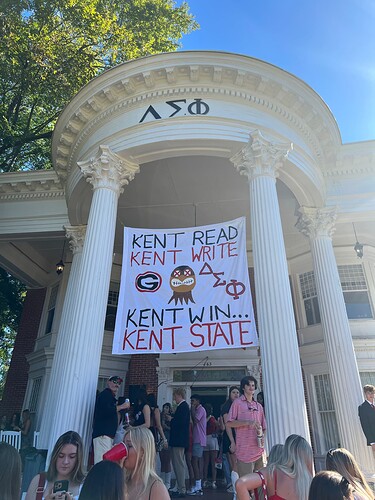