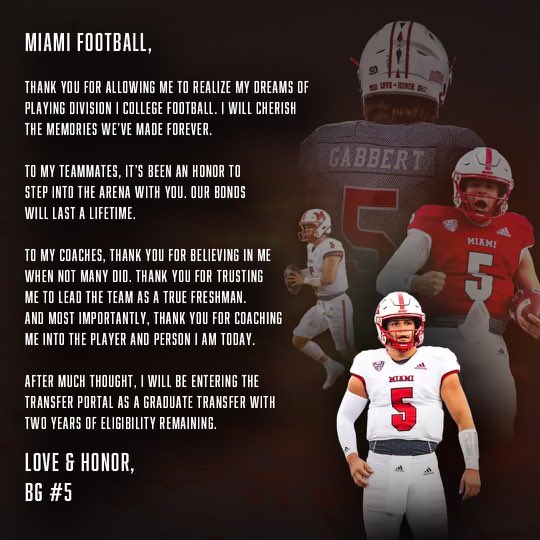 It’s really unfortunate seeing him go like this. Thought this year would be a big bounce back following injury, but it wasn’t meant to be. I hold no ill will towards him and wish him well. I’d love to see him try his hand at P5 school, but not sure who would give him a shot at that level (to start right away, that is).

I think before the season, this almost seemed inevitable. But with how the season played out, I’m a little surprised. Maybe it’s more of an issue with coaching/scheme.

Honestly, I’m not sure where Brett goes from here. He had a rough year battling injuries and can be effective IF healthy, but that’s not been the case for most of his college career.

I guess he can battle for a starting P5 job, but I don’t see anyone just handing him the keys.

I wish him the best but not sure he’s going to find what he’s looking for.

I love the guy and think he did a great job here. I am pulling for him and hope he lands somewhere great as well as earns the starting job. It won’t be easy. If I was a betting man, I’d think Northwestern would be a prime candidate. That way, he gets a killer degree as well…

Wish him all the best . Hope he finds a good match and can have TWO healthy seasons.

SMITH is the QB now for at least the bowl game.

Next season QB competition should be wide open with lots of options.

Best wishes to Brett. But for our sake, we really need to hit up the portal ourselves because we are not set up for success with Smith at QB unless major changes are made.

I hope that Brett isn’t basing his future on that complete fucking idiot.

I would imagine we will hit the portal for a QB and give the young guys a shot as well.

In my opinion, this is a position where the G5/MAC schools have been ELEVATED thanks to the portal. Look at what it’s done for BG and others

I sometimes wonder how Hendrix would have done had he a full roster of talent around him. I think likely would have been excellent?

He played four years, won a MAC championship and will be graduating. Without recent rule changes he wouldn’t even have eligibility remaining. So overall, no issues with him transferring. I hope he ends up in a good spot, and all should be rooting for him there.

Agreed. He graduated, won a MAC championship, and won a bowl game. As a Miami football player, those are the big things to check off the list. Best of luck to Brett.

Just as I predicted but sooner than Dec 6 because he already has his undergrad degree. Might keep a couple of high-potential guys in our QB room from jumping in the portal.

Sorry to see him go. He was a very good QB when healthy. Top 10 in all Miami passing categories. Contrary to what others are saying, I think he will end up at a P5 school. He has the talent when healthy. I hope CM gives a look to some of the younger guys like Joe Humphreys and just doesn’t declare AS the starter going into next year.

In my very humble opinion, he is leaving for one reason–Chuck Martin failed to protect him not once, but twice! If he was my kid, I would urge him to leave. Well, now we know.

Martin’s leadership has been less than mediocre, at best. Nine years and few high points. Now, we lose a terrific QB b/c of his stupidity. I hate to fire coaches. I want them to be successful and move up, leaving the program in better shape then when he came. This is a HUGE step backward. Smith can run, but he’s a less than average MAC QB. Humphrey’s has great video. Hope he can develop fast.

I hate to fire coaches. I want them to win and love up, leaving the program in better shape than when he was hired. MARTIN HAS FAILED! A NEW COACH IS VITAL IF THIS PROGRAM IS TO ACHIEVE MORE THAN MEDIOCRITY.

The happiest people today? All the MAC coaches. All of us are stunned, sad, and pissed!

Give Smith credit for being to accomplish what he has, but we’re not winning a MAC title with him under center.

But we will go to another 6-6 bowl game with him and this OC. Maybe 7-5. But he is not good enough to win the MAC. Sorry if that ruffles some feathers. But it is the truth.