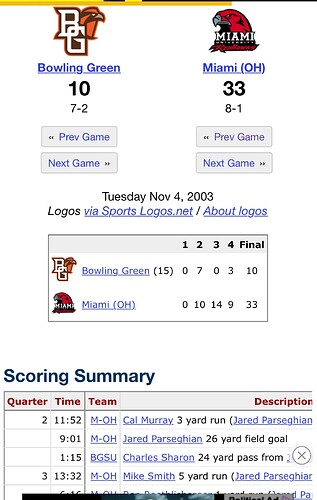 And one week after that was even better.

That team could have made it 66-6 if they really wanted to.

I see what you did there.

Please post again in one week! I would argue that win over Marshall was the biggest Miami victory in my 36 years of Miami fandom. Had we lost Marshall would have been the east’s representative in the MAC championship game…again!

Folks who weren’t around then won’t know how much we hated them and what an obstacle they were to overcome. They entered the conference in 1997 and i believe they were in the championship game every year until 03. Most years we finished second after devastating losses to The Thundering Turd.

I was there. 70+° at kickoff. The ads around the Upham Courtyard read “Are you afraid of the dark?” Nothing fancy, just colorful pieces of paper with I think it was Michael Larkin or Terrell Jones from the shoulder pads on up

That was a fun game. I believe there were hot air balloons and a bunch of other things there….also one of the last times Miami made an effort to have a whole day experience at Yager

We played golf that day at Indian Ridge on our way up from Cincinnati.

That dude was so underrated. Heart of the team, made a ton of tackles, seemed to get hurt every week, but would always come back into the game, suit up the next week, then he would make more tackles.

That night was a rare case of the stars (literally and figuratively) aligning.